Keep Calm and Just Say No to a Second Referendum 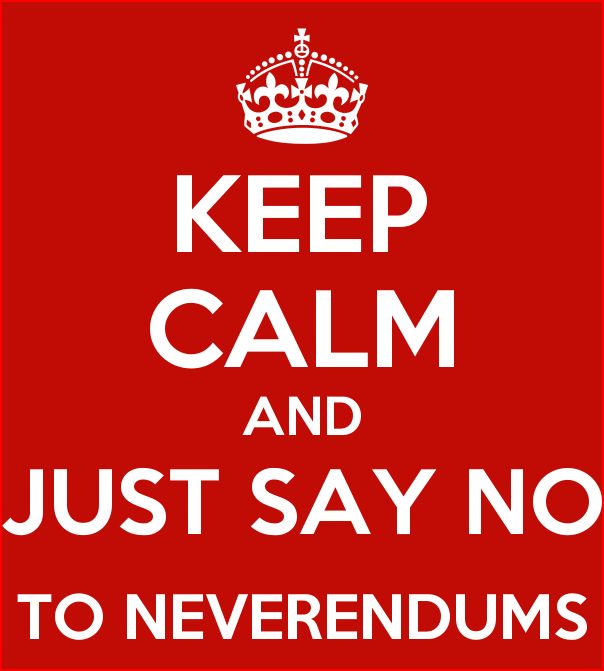 In this article Alistair McConnachie says that the Prime Minister must be clear that there will be no second referendum.

If she is not clear, and if she gives the impression that she would be open to one sometime in the future, then her words will be misrepresented by the nationalist ScotMedia as a 'promise' to hold one.

Subsequent events and expectations will then prevent her correcting her original point; and will force her into holding one!

We know this because such deliberate misrepresentation of a Prime Minister's words has happened before.

Our organisation does not support any particular political party per se but we take a keen interest in what they are all saying.

The Prime Minister addressed the Scottish Conservative Party Conference in Glasgow on 3 March 2017. She made some very refreshing cultural, historical, economic and political points about the United Kingdom. Above all, though, we were relieved that she did not mention anything like the possibility of a referendum after the UK has left the EU, or anything which might suggest that she would be open to having one in, say, 2019.

Our fear is that if she even merely suggests such a slight possibility, then it will be taken literally by the ScotMedia, which would immediately move to shift events and expectations to the point where she would be unable to back down.

We are justified in this fear because it has happened before.

However, that casual comment was quickly, deliberately and entirely dishonestly re-interpreted as a 'promise' by the nationalist ScotMedia – even though Cameron had 'promised' no such thing!

Such was the power of this lying misrepresentation that it became, almost immediately, something that he could not back down from.

Cameron had allowed himself to be manipulated.

HOW CAMERON WAS MANIPULATED
Even though he never actually promised 'more powers' the nationalist ScotMedia correctly calculated that because he was prevaricating and didn't seem clear, then it was something they could force his hand on!

If they lied that he had 'promised' more powers, they correctly calculated that he would not be able to deny it!

Consequently, Cameron found himself manoeuvred into a position where he could not realistically correct what he had said.

He could not actually say, "No, I never promised 'more powers'!"

Events and expectations – led by the nationalist ScotMedia – meant that he had to go along with the lie that he had somehow 'promised' more powers.

Indeed, he had to go along to such an extent that he actually, at the end of the day, deliberately created 'more powers'!

He was successfully manipulated because he had not been clear about his intentions from the get-go.

Score one to the nationalist ScotMedia; and David Cameron nil!

THERESA MAY - DO NOT MAKE THE SAME MISTAKE!
Similarly, if Theresa May were ever to make the mistake of even 'suggesting' that a second referendum could be held in 2019, or that this is something that her government won't consider 'until 2019', or that "it would be open to the idea", then the nationalist media will again deliberately misrepresent this as 'a promise to hold one in 2019'.

They will calculate that if they lie that she has 'promised' one, then they can move events and expectations to the point where she cannot deny it.

This lie will very quickly become the new truth in Scottish politics.

Events will move to the point where she will find it something that she cannot realistically back down from. She will not be able to correct what she said.

She will be unable to say, "No, I never promised a second referendum!"

Therefore, the Prime Minister needs to be clear.

She needs to know that if she makes any suggestion that there might...possibly...could be...maybe...a referendum in 2019 then that will be misrepresented as a 'promise' by the nationalist ScotMedia, and it will be taken as the Starting Pistol for the second one by the Nats.

The upshot is that we would to be forced to endure, in effect, a 2 and a half year referendum campaign again!

HERE IS OUR POSITION
The Prime Minister of the United Kingdom has an absolute moral and democratic responsibility and duty to stand for the integrity, stability and security of the UK.

The integrity, stability and security of the UK is not up for debate.

The Prime Minister has an absolute moral and democratic right to say No to a second referendum, and Yes to a united Britain.

There are many people in Scotland who will support her if she stands up strongly against the Nats.

We say, Britain is One Nation Indivisible and its future is not up for debate again.

Please, Prime Minister, do not say anything which will be deliberately misinterpreted by the nationalist ScotMedia to enable it to shift events and expectations to the point where it can effectively force a second referendum upon us.

Be Clear! No Second Referendum!

Such clarity will also help your vote at the Council Elections, by the way.

And if, for strategic reasons, you don't want to say it in such clear terms, then at least do not give the impression that it is a possibility, not even a faint one; because your words will be twisted into a 'promise' which will trap you!

Recommended Reading on Referendums:
Time to Shut the Door on a Second Referendum
www.aforceforgood.org.uk/debunk/ref2

A Wake Up Call to Unionism
www.abbup.org/single-post/2016/11/02/A-Wake-Up-Call-to-Unionism