Sturgeon has No Legal Right to "Call" Referendum 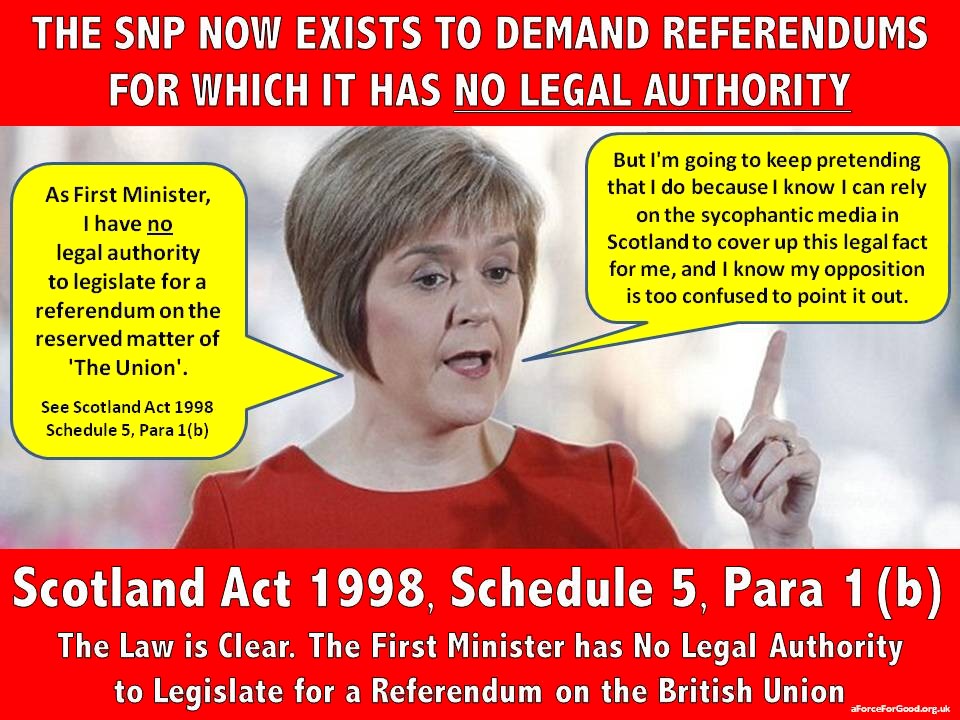 Nicola Sturgeon is constantly getting away with the masquerade that she has "the power to call" a second referendum. However, the legal process is not on her side. Any attempt to do so without the express permission of the British Parliament would be highly illegal. So why are none of our pro-UK politicians picking her up on her imposture? This article by Alistair McConnachie, who has a degree in Scots Law, examines the legal facts of the matter.

There are only two things certain in modern Scottish political life. The SNP's desire for "independence" transcends all political matters; and it will never stop advocating for referendums until it wins one.

If we won by less than 55% then it would be game on for a third. There is no doubt about that.

The only way it might "put the matter to rest", is if we won by a majority which was greater than the 55% of last time.

Indeed, pushing the separatist vote down 10% to 35%, and ours up to 65% is one of the long-term Goals of A Force For Good and should be the general goal for the entire pro-UK movement.

There is talk that Nicola Sturgeon will announce at the SNP Spring Conference in March 2017, that she is "calling" a second referendum.

As if the power to do all of this is in her hands. As if this is a decision for Scotland alone, and that the rest of the United Kingdom has no say in a process which could potentially destroy it!

The pro-UK politicians have – as usual – been afraid to contradict her on this point. They have allowed Ms Sturgeon to masquerade with this false sense of power, dominate the debate and set in motion the false understanding that she has "the power to do this".

This wrong idea spreads when her claims are not properly challenged by the politicians who should be standing up for Scotland's place in the United Kingdom.

So when the politicians won't do it then it is left to grassroots campaigners such as ourselves.

For many months now, A Force For Good has been at the centre of promoting the facts that she has no right to "call" anything, because the law is not on her side. 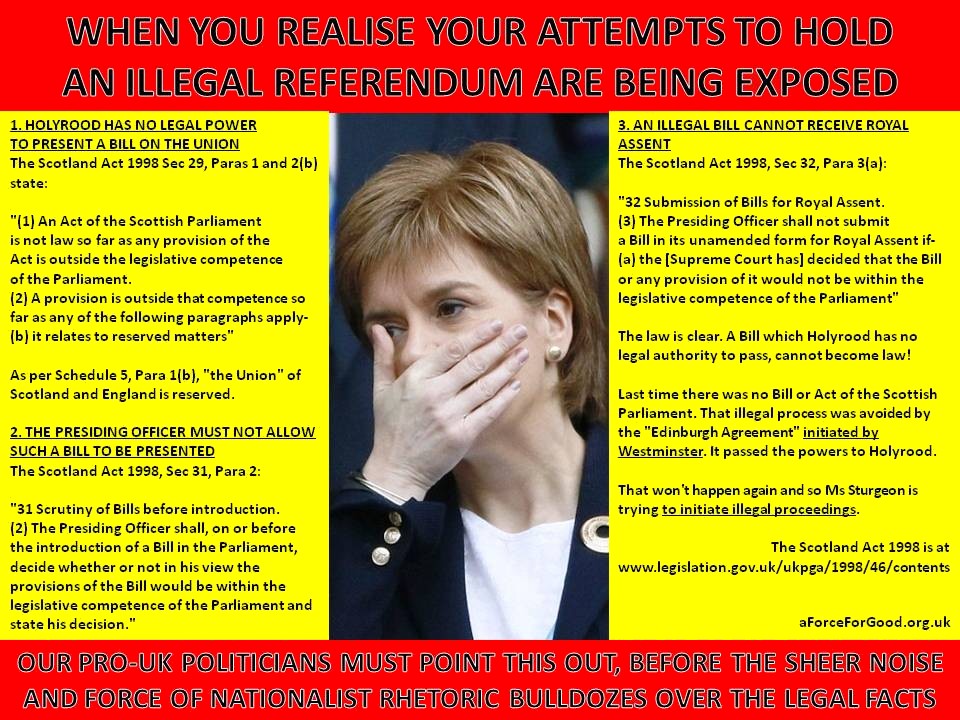 Back on 6 September 2016, she stood up in Holyrood and announced her ongoing "Programme for the Destruction of the United Kingdom" which she euphemistically described as her "Programme for Government".

She stated that, "To ensure all options are open to us, this Programme for Government makes clear that we will consult on a draft Referendum Bill, so that it is ready for immediate introduction if we conclude that independence is the best or only way to protect Scotland's interests."

The publication of a draft Referendum Bill is an essential step in the legislative process before it can be voted upon in the Holyrood chamber. A consultation on the bill will be launched by June 2017 at the latest. (1)

However, there are at least 4 legal problems for Ms Sturgeon here.

1. HOLYROOD HAS NO LEGAL COMPETENCY TO HOLD A REFERENDUM ON THE UNION
The legislative competence of the Scottish Parliament derives from the Scotland Act 1998. (2)

As per Schedule 5, Para 1(b), "the Union" of Scotland and England is a reserved matter.

This means that a Bill "relating to" the reserved matter of the Union is not within the legislative competence of the Scottish Parliament.

2. THE PRESIDING OFFICER MUST FORBID THE PRESENTATION OF SUCH A BILL
The Presiding Officer has a duty to ensure that all Bills which are presented to the Scottish Parliament are within the legislative competence of the Parliament.

31 Scrutiny of Bills before introduction.
(2) The Presiding Officer shall, on or before the introduction of a Bill in the Parliament, decide whether or not in his view the provisions of the Bill would be within the legislative competence of the Parliament and state his decision.

The SNP believes, however, that Holyrood does have the right to pass such a Bill.

In its report, The Herald added that "Any legally binding second independence referendum would require the consent of Westminster but SNP sources insisted that the draft bill would be legally competent."

Of course, "SNP sources" can be expected to say this.

3. AN ILLEGAL BILL CANNOT RECEIVE ROYAL ASSENT
If it somehow goes forward and is voted upon, then it would require Royal Assent to become a legal Act. At this stage, the Supreme Court would become involved, as per Section 32, Para 3(a) of the Scotland Act 1998 which states:

32 Submission of Bills for Royal Assent.
(3) The Presiding Officer shall not submit a Bill in its unamended form for Royal Assent if-
(a) the [Supreme Court has] decided that the Bill or any provision of it would not be within the legislative competence of the Parliament

Providing the Supreme Court considers that it is within the authority of the Scottish Parliament to pass such a Bill and that it is legal for the Queen to grant her Royal Assent (and all of that seems very unlikely) then it still means that...

4. THE BRITISH GOVERNMENT, ACTING ON BEHALF OF ALL OF THE UNITED KINGDOM, HAS THE ULTIMATE AUTHORITY TO DECIDE
If all the above barriers were somehow overcome, then it is still ultimately down to the British Government, and the British Parliament, representing all the British people, to decide whether it wants to put the United Kingdom through this process again.

It is up to our collective British Parliament, representing everyone in the United Kingdom, to decide whether or not it is prepared to risk, once again, the territorial integrity of the British State and Nation.

This is a crucial point!

If there were even the slightest suggestion (which there most certainly is) that the referendum could be lost and the UK destroyed, then the referendum must not be allowed to go ahead.

Breaking up Britain is not for Scotland alone to decide. It's a matter for everyone wherever they live who believes in Britain and who values being British. The ultimate decision on a referendum rests with the Collective Constitutional Authority which represents everyone in Britain – the British Parliament.

Scottish Nationalists don't believe the authority lies with the British Parliament because they don't accept that Britain is a Nation with a Collective Constitutional Centre. However, if we accept that Britain is a Nation then we understand that the British Parliament has the ultimate authority, the perfect right and the absolute duty to maintain it as one.

HOW DID THIS WORK LAST TIME?
Now you may be asking, "What happened last time?"

Last time there was no Bill or Act of the Scottish Parliament. That process was avoided by the "Edinburgh Agreement", which was initiated by Westminster.

This Agreement ensured that Westminster would pass the relevant powers to the Scottish Parliament in order to allow it to go ahead with the referendum.

This time there will not be any initiation from the Westminster end.

That is why Ms Sturgeon is trying to initiate proceedings from the Holyrood end, and masquerade as if she has the power to initiate such a thing.

So where does this leave us?

We need to hear our pro-UK politicians saying these things.

If they do not say these things, then there is a danger that the SNP will, by default, create a sense of momentum which will, in effect, render the reality of the law redundant.

If you liked this article, please help support us with a PayPal donation.


Other donate Options are available on our Donate page here.