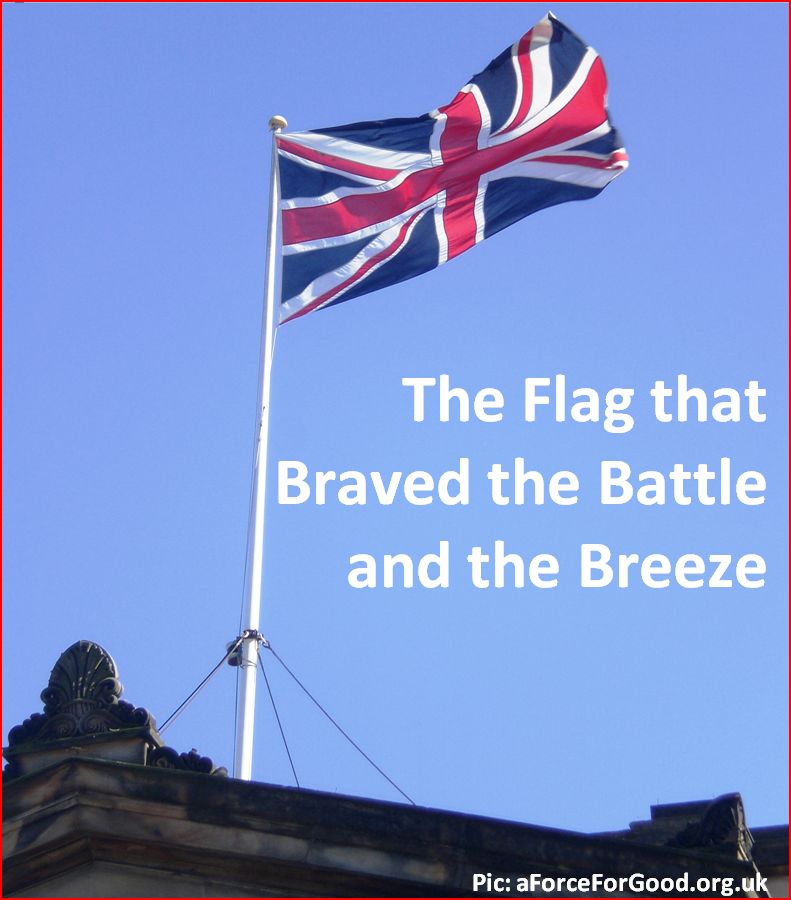 The real challenge for unionists is to restore the Union Jack as a flag of Scotland, and 2014 is going to be all about that, says Alistair McConnachie.
Posted 3 November 2013.

Some unionists get upset at the extent to which the nationalists appear to have "captured" the Saltire as "their" flag. We know what they mean. But the fact is that unionists can still fly the Saltire whenever we want. It doesn't mean we support separation.

This article is about the importance of flying the Union Jack in Scotland, not only as the flag of the United Kingdom, but also as one of Scotland's flags.

THE UNION JACK – FOR SCOTLAND AND BRITAIN
We wrote recently that Britain is a nation to the extent that we make it a nation by our acts of consciously remembering it as a nation, and asserting, on a regular basis, related matters about it as a nation.

One of those elements of Britain, the nation, is the British flag – the Union Jack – a visible representation of the UK.

It is usual to fly the flag at events and celebrations which are obviously British – inclusive of all the UK. For example, supporting Team GB at the Olympics, showing support for the Monarchy or Armed Forces, British competitions and award ceremonies, and so on.

However, the Union Jack can also be used:
1- to represent each Home Nation on its own, or
2- by one Home Nation to show support for another part of the UK.

Let's look at the first point.

ENGLISH FOOTBALL FANS FLYING THE UNION JACK
England's football fans used to fly the Union Jack all the time. Some people thought that was wrong because "England's flag is the Cross of St George". The objection was that the English fans were mistaking Britain for England, and conflating England into all of Britain.

Maybe some of them were doing that.

This is a basic point, but it has been forgotten, or has got confused with the passage of time.

When we want to fly a flag to support "Scotland" we tend to think of flying the Saltire, but it would be just as proper to fly the Union Jack because the Union Jack is also Scotland's flag.

Over time this probably upset internal relations by confusing some people's understanding about the proper role of the Union Jack – confusing it with an English thing, rather than a flag which all parts of the UK could fly equally, in order to represent themselves if they chose.

However, as we say, if English fans want to fly the Union Jack at England games, good for them. Similarly Scots can fly it to show support for Scotland.

THE UNION JACK AT THE COMMONWEALTH GAMES
To take the second point – showing support for another part of the UK: Next year is the (British) Commonwealth Games in Glasgow. Even though there will not be a specific "Team GB", there will be many athletes for whom the Union Jack is also their national flag.

Indeed, there will be 23 of the 71 competitors (32%, virtually a third), for whom the Union Jack is also their flag, is on their flag, or is their Royal flag.

Here's a question: If there is an event in which an English, Northern Irish or Welsh athlete is competing (or a Crown Dependency athlete) and there is no Scottish athlete; yet a Scottish spectator wants to show support for that fellow Briton, or indeed has no favourites and wants to support all of the Home Nation athletes – then which flag should he or she wave?

For example, I have been lucky enough to obtain two tickets for the Women's Heptathlon final on 30 July 2014. I'm hoping that Jessica Ennis will be in it. She will be competing for the English team. Rather than wave a Cross of St George, what flag should I wave?

The Union Jack is the obvious answer! And I'm looking forward to waving it to show my support for her, and indeed for any other Britons who are in the final.

That seems more natural to me than me waving a Cross of St George. The Union Jack is the appropriate flag to fly to support a fellow Briton.


DO WHAT WE CAN DO, TO KEEP THE UNION IN VIEW There is also an important political reason to fly the Union Jack.

Nationalists want to push all symbols of the Union out of public view. It is understandable, although not acceptable, that nationalist-controlled councils will do everything they can to get rid of the Union Jack as the Union's most visible symbol. That is the mission they have set themselves. They can be expected to do this.

The point is to counter them.

The nationalists will win the cultural battle if unionists in the public and private sectors do not realise that they also have the power to counter the nationalists' agenda.

A great way, and a very simple way to do that, is to run the Union Jack up the flagpole.

And when we fly the Union Jack, we are also flying one of Scotland's flags.

It is a win-win situation for us.

To not use it, or not fly it, or not show it, when it is appropriate, is like a Formula One driver refusing to use the top quality fuel which will ensure his engine performs at maximum capacity. It is to deliberately hinder and undermine ourselves.

Nations are precious things, and like many precious things, they are easily broken. They can only be sustained by regular acts of "conscious remembering", and "assertions", such as flag flying.

Let us not miss any opportunities.

Where unionists have the power and opportunity, whether in the public sector, or the private sector, let us do what we can do to keep the Union in view.

Let us work to restore the Union Jack to view, and re-establish it as one of Scotland's most flown flags.