4 Reasons Why We Oppose a 2nd Referendum 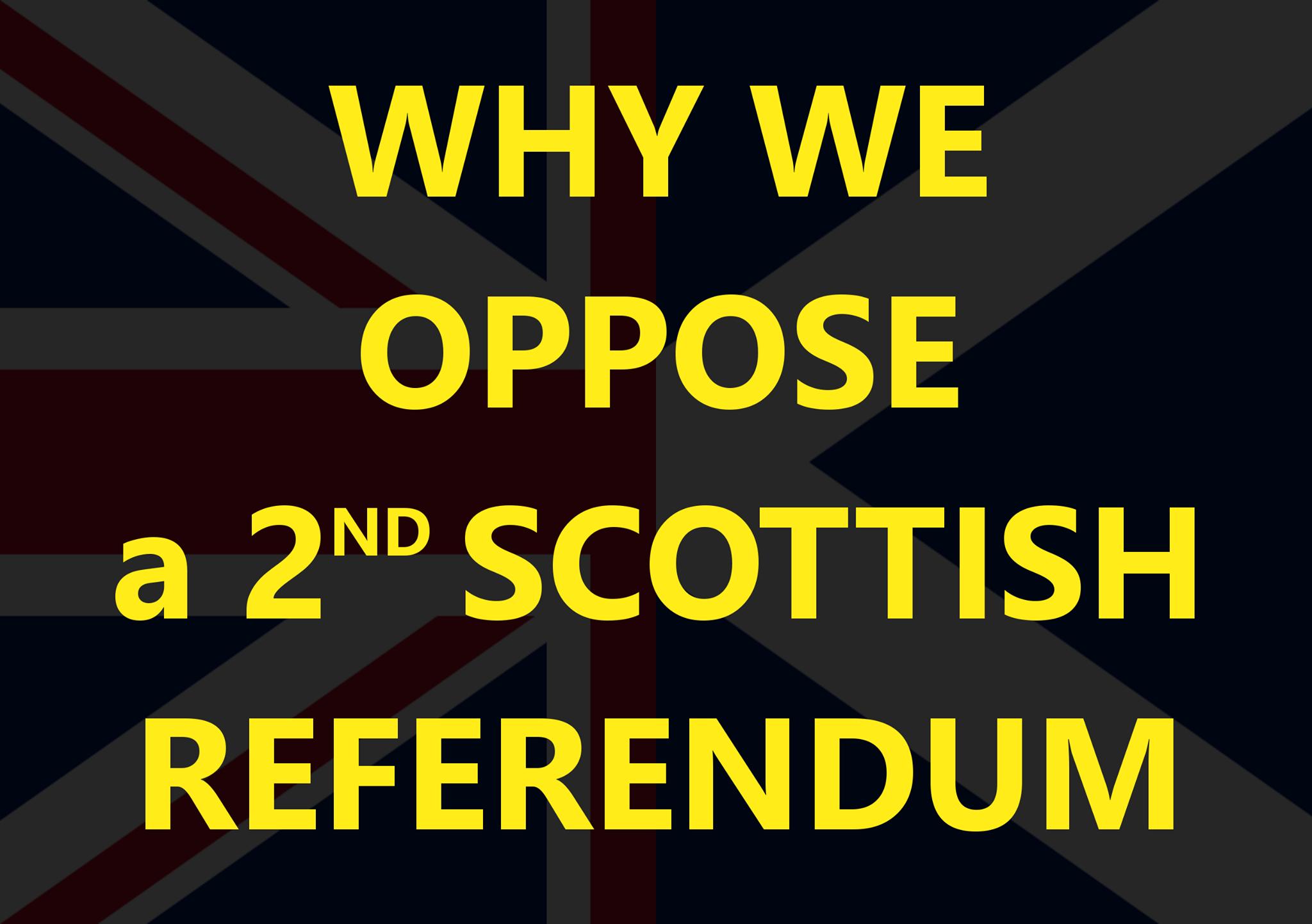 Alistair McConnachie explains why we are against a second referendum on Scottish separation; points out what we should concentrate on; and answers some Frequently Heard Questions. Published on this site on 31 October 2017.

On Monday 13 November 2017, MPs will debate the prospect of a second Scottish separation referendum.

This debate was initiated by petition.parliament.uk E-Petition 180642 which stated, "Another Scottish independence referendum should not be allowed to happen" and which reached 221,514 signatories.

MPs will debate the matter in Parliament if a Petition obtains over 100,000 signatories. However, the debate is not held in the House of Commons, but in the Grand Committee Room between the hours of 4.30pm-7.30pm.

Although an alternative Petition 168781; "Agree to a second referendum on Scottish Independence", fell far short of the required amount and reached only 38,515, it appears that it will also be referenced during the day.

You'll be able to watch online at parliamentlive.tv

A Force For Good is going to be outside Westminster that afternoon. We'll have our anti-2nd referendum Leaflets, a Banner, and our colourful Flags. If you want to join us, please contact us beforehand.

Here, we lay out our 4 basic points against a second referendum; and in more depth than appears on our Leaflet:

1. WE SAID NO
Scotland has already voted to stay part of the UK. We were told us it was "a once in a generation opportunity". The phrase appears 3 times in the official White Paper entitled Scotland's Future (an anagram of Fraudulent Costs) – see pp.i, viii, and 556.

The Edinburgh Agreement, signed by both sides, said it would be "a result that everyone will respect".

Yet the Scottish Nationalists immediately ignored the result and started to call for another!

To hold a second referendum makes a mockery of the first, undermines its legitimacy, disrespects the pro-UK vote, and holds it in contempt!

The Nationalist politicians should honour the commitment they made.

2. IT'S DIVISIVE
The United Kingdom is held together by a Representative Parliamentary Democracy, where we elect MPs to our Collective British Parliament to make decisions on our behalf.

Referendums, however, reduce everything to black or white, Yes or No. Complex issues can be over-simplified, division and polarisation can result, and social bitterness can be created which damages society and prevents it moving on.

At the end of the day, the result can be indecisive, or it can be – as we see in the behaviour of the Scottish Nationalists – ignored by the losers who continue to call for another!

By contrast, our Representative Parliamentary Democracy allows for all opinions to be represented: for debate, reason, compromise, accommodation and resolution.

3. IT'S DESTABILISING
Constitutional uncertainty leads to economic uncertainty. Individuals and businesses do not invest because they don't know what laws, regulation and tax systems they will be faced with! Agitating for another separation referendum damages our economy and job prospects.

4. WE'RE BRITISH
A majority of Scots also have a British identity. We have shared this nationhood and identity with our English, Northern Irish and Welsh family for centuries. Union has been our common project, and together we forged Empire, fought two World Wars and built the Welfare State. We are stronger together!

WHAT WE MUST DO
The United Kingdom should not be held together by a mere thread which can be broken at a referendum won by a simple majority of a small percentage of the UK electorate voting on one day in one part of the country.

Our centuries-old Nation-State must be tied more tightly than that!

For this bond, we look ultimately to our Representative Parliamentary Democracy, where we elect MPs to our Collective British Parliament to make decisions on our behalf; and in whom we imbue an absolute moral and democratic responsibility and duty – acting collectively on behalf of all British citizens – to stand for the integrity, cohesion, stability and security of the UK.

To this end, the British Government and Parliament must ensure that there will not be a Referendum in the lifetime of this British Parliament. At future Elections, Parties should remember that there are a lot of votes to be won by seeking a cast-iron mandate to keep the UK together.

Instead of another Scottish referendum, let us concentrate on our established tradition of Representative Democracy.

Let us encourage the British Parliament to represent all parts of the UK, and to build Ever Closer Union between all our people.

Ultimately, let us also question and reject the proposition that the United Kingdom can be unravelled through the flawed Referendum mechanism.

FIVE FAQs ABOUT a SECOND SCOTTISH REFERENDUM
1. Scottish Nationalists will say: "If you believe in the UK so much, why be afraid to ask the people of Scotland the same question again?"
It is precisely because we believe in the UK so much that we do not want to see its very existence being constantly called into question! Simply to call for another referendum is to encourage the break-up of Britain.

It's like asking again and again whether something deserves to die! It's intended deliberately to destabilise, and create anxiety and uncertainty about its future. For the UK to function and prosper, its very life should not be always up for debate!

2. "But Scotland has a right to self-determination!"
Scottish Nationalists will sometimes claim that "Scotland" has a "right" to self-determination under international law by pointing to the "Charter of the United Nations", Chapter 1 (Purposes and Principles), Article 1(2) which states that the purpose of the UN includes: "To develop friendly relations among nations based on respect for the principle of equal rights and self-determination of peoples, and to take other appropriate measures to strengthen universal peace;"

They may also make reference to the UN's "International Covenant on Economic, Social and Cultural Rights". Part 1, Article 1 states: "All peoples have the right of self-determination. By virtue of that right they freely determine their political status and freely pursue their economic, social and cultural development."

When Scottish Nationalists use the phrase "self-determination", what they really mean is "separate".

In our case, we look to the British Parliament as the national Institution which has the responsibility and duty, on behalf of us all, to keep the UK together.

The international resolutions above are not intended to be interpreted in such a way as to ignore the viewpoints of Unionists or to justify the breaking of a Nation-State's constitutional law.

4."Why should Westminster decide whether to hold a Referendum rather than Holyrood?"
Westminster is the home of the Collective British Government and Parliament. The executive at Holyrood is not a "government" – despite being misnamed by the Scotland Act 2012 – because it does not have the powers of a separate or federal state.

Rather, Holyrood is a devolved and subsidiary body of the British State; in a vertical, not horizontal, relationship. The relationship is hierarchical, not level. It is Westminster which retains the power to make these legal decisions, because – as the Collective Parliament for all the people of the UK – it has the responsibility and duty to protect the interests of all British citizens, and maintain the integrity of the overall Nation-State.

For example, almost 600 of the 650 MPs were elected in 2017 on an explicit manifesto commitment to oppose a second referendum. From the British-wide perspective, that mandate trumps the SNP's claimed mandate.

(It is over 600 if we include the DUP members who didn't actually have it in their manifesto, but can nevertheless be counted on to oppose the SNP.)

Furthermore, measured by turnout, Westminster has greater democratic legitimacy in Scotland than Holyrood. For example, average turnout at the 5 General Elections in Scotland since 2001 is 64%, while the average at the 5 Holyrood elections since 1999 is 53% (Wikipedia).

Moreover, by standing in the British General Election, and by taking up their seats, the Scottish Nationalists are giving Parliament – and the Government it forms – the authority to forbid a second referendum. Their MPs acknowledge that power by simply taking part in its proceedings.

WHO WE ARE
We are A Force For Good; a grassroots pro-UK campaigning organisation based in Glasgow. We believe the United Kingdom of Great Britain and Northern Ireland shall be maintained; that it is a Unitary State and One Nation; that Ever Closer Union between all the people and parts of the UK shall be pursued; and that we are a Constitutional Monarchy and Representative Parliamentary Democracy.

A Force For Good is not affiliated with any political party or religious group. We are not a right or left-wing group, and we don't care what your religion, or your religious affiliation is. If you are for the UK then we are for you.

We make a sustained case for the UK which does not ebb and flow with the electoral cycle.

We were founded on 21 March 2012 and incorporated as a Company with Directors on 27 April 2016. A Force For Good is the trading name of AFFG Productions Ltd, registered in Scotland 533791.

If you like what we say, please support us by signing-up to receive our free regular Update email – which will keep you informed of new articles and relevant pro-UK information. Enter your details in the 'Receive Free Newsletter' box at the top right of this page. You can find out more about AFFG at the About and Contact page.

Please donate to our work and Street Activism via PayPal here:
tinyurl.com/ydxne3qx

Recommended Reading on Referendums:
4 Reasons Why We Oppose a 2nd Referendum
www.aforceforgood.org.uk/strategy/ref5

How Westminster can Build a Cast-Iron Mandate against a Second Referendum
www.aforceforgood.org.uk/strategy/mandate

Beware the Bravado of the 'Bring it On' Brigade: 18 Reasons to be Careful
www.aforceforgood.org.uk/strategy/ref4

Keep Calm and Just Say No to a Second Referendum
www.aforceforgood.org.uk/debunk/ref3

Time to Shut the Door on a Second Referendum
www.aforceforgood.org.uk/debunk/ref2

Why we Must Oppose a Second Referendum
www.thebusp.org/single-post/2016/10/29/Why-We-Must-Oppose-a-Second-Referendum

A Wake Up Call to Unionism
www.thebusp.org/single-post/2016/11/02/A-Wake-Up-Call-to-Unionism