Alistair McConnachie considers some contemporary aspects of the Union Jack. This article was published originally in the July 2007 issue of Sovereignty, and was published on this site on 21 March 2012.

Right: Early designs for the Union Jack from 1604, and now held by the National Library of Scotland. A hand-written note from the Earl of Nottingham underneath the lower-middle design, recommends it as "like man and wife".

When I was a little boy, I had 2 pages of flags. I recall it was a Pan Am brochure which had a spread illustrating all the world's flags. I remember lying on the floor of our living room in Tripoli, Libya looking at all these intriguing designs comparing "my flag" to all the other flags in the world and realising, even in my little 8-year old brain, that Britain was unique and special, because we definitely had the very best flag by miles.

Nothing came close for brilliant colour or clever design. Nothing looked so fascinating as this amazing pattern of interwoven crosses. What a creation!

Like the perfect song that was out there waiting to be sung, like the quintessential piece of music which had to be found, it was the supreme flag design which had been unborn and waiting, but which was now incarnated in physical reality. Divine almost.

Even the structure -- if we imagined it to be wooden or steel cross-beams -- would be the strongest physical structure you could build.

I felt lucky to be represented by such a flag! How the other countries must envy us, I thought.

We were first in the line when they gave out flag designs! We had won the flag lottery, no doubt!

It even had a friendly, matey, quirky name, "The Union Jack".

IT'S the "UNION JACK", JACK!
Let us say, unequivocally, that our preferred name for the flag is "Union Jack".

"Union flag" is dry, boring, pompous, officious, and on its face pretty meaningless and confusing unless one explains which "union" one is referring to -- not, for example, the flag of the TGWU.

Sure, the "Jack" word possibly came from the practice of flying the flag at sea on the "jackstaff" -- a small mast mounted on the bowsprit, the large spar projecting forwards from the bows of a ship. Others say that the "jackstaff" is so named because a "jack" is a small flag, but really, who cares about that!

Seriously, how many of us today get a chance to sail a ship and then see a small "Union flag" on the bow and get an opportunity to say, with vexillological exactitude, "Ah, there before me I see a little Union 'Jack' fluttering proudly from the staff."

Get real! It's "Union Jack", to all but pedants.

Moreover, the appellation "Jack" also gives it an appealing down-to-earth popular character - gives it a personality, a name, conferring almost a human identity, on our friend. In that regard, it has also been suggested that the "Jack" may come from the fact that it was James I (Jack), King of Great Britain's 1 idea.

In 1908, the Earl of Crewe, representing the government stated that, "A Union Jack should be regarded as the national flag, and undoubtedly may be flown on land by all His Majesty's subjects." 2

THE UNION JACK and WALES
The first Union Jack was set out by Royal Proclamation on 12 April 1606.

Some Welsh people complain that Wales is not represented in the Union Jack.

Wales isn't represented because when the flag was designed, Wales was considered a Principality of England after Henry VIII's act of union between England and Wales in 1536.

However, it can be said that St Patrick is generally thought to have been born in what is now Wales and was what we would consider today to be a Welshman. In that sense, Wales is represented within the Union Jack.

Some of the Welsh nationalists who complain about this have no intention of respecting the Union Jack anyway, even if Wales were to be included, and so in that sense, their opinion really doesn't count!

Nevertheless, it would be good if Wales could be incorporated more directly somehow. In the spirit of British inclusion, we make the following suggestion.

INCORPORATE the ST DAVID'S CROSS
The St David's Cross is a gold cross on a black background. Theoretically, this could be incorporated quite attractively into a Union Jack, perhaps for some ceremonial occasions in Wales, by running a gold trim down the sides - inside or out - of the white trim of the St George's Cross.

Has this already been done in any Army Regiment regalia, for example? We don't know.

THE UNION JACK and IRELAND
The Union Jack as we know it today dates back to 1 January 1801, when the United Kingdom with Ireland and the second Union Jack came into being.

St Patrick is, of course, the patron saint of Ireland and is celebrated in both the North and South, but has come to be associated largely with the South.

Many Protestants in the North -- irritated by the South's monopoly of St Patrick, work to reclaim St Patrick for the Protestants as well. They emphasise that St Patrick is not only an Irish symbol for some of the Catholic, or Republican, tendency but is a British symbol also.

In this dual role, he has the potential to represent everyone on the island of Ireland.

Some Southern Irish have an antipathy to the Union Jack, which is ironic and a pity given that the symbol of their Saint is included in the actual flag!

The British flag has the Irish Saint's Cross in it! What could be more inclusive of all the Irish people than that! Indeed, without the clever inclusion of the Cross of St Patrick, the Union Jack design is far less dramatic.

Thus, the Union Jack could ideally be seen as an inclusive symbol for all people in Ireland and something for Irish people living in Great Britain to get behind also!

THE UNION JACK and SCOTLAND
The Union Jack has existed since Royal Proclamation on 12 April 1606, just after the Regal Union in 1603. It was not established, as some people mistakenly imagine, for the political union of 1707.

There has been an unfortunate tendency in Scotland for some to associate the Union Jack with sectarianism, which has grown out of the Protestant/Catholic divide and to an extent through the related Rangers/Celtic rivalry. This is a great pity, because the Union Jack should represent everyone, and certainly not just Protestants!

We need to emphasise ways in which the Union Jack can reach out and represent all the people in Scotland including those of Southern Irish descent who may be opposed to it. As we emphasise, St Patrick is represented prominently in the flag too!

Also, let us emphasise that when we raise the Union Jack, we are raising also the flag of Scotland. As Nick Groom has written in relation to England:

Rather than taking down the Union Jack, the Union Jack is actually one way of flying the cross of St George. The Union Jack is an international flag, representing four nations and defining them in their relationships to each other. It is also, moreover, a global flag: the flag of the British Empire. 3

THE GLOBAL UNION JACK
The following are the 30 national and state flags in the world which also feature the Union Jack: The British Overseas Territories of Anguilla, Bermuda, British Antarctic Territory, British Indian Ocean Territory, British Virgin Islands, the Cayman Islands, the Falkland Islands, Gibraltar (variant), Montserrat, Pitcairn Island, St Helena Ascension and Tristan da Cunha, South Georgia and the South Sandwich Islands and the Turks and Caicos Islands all feature a Union Jack in the top left hand corner. The Sovereign Base Areas of Akrotiri and Dhekelia has a Union Jack as its flag. Hawaii features a Union jack in its top left hand corner and recalls a Union Jack handed to the King of Hawaii in 1793 by an army officer. Australia, and the state flags of New South Wales, Queensland, South Australia, Tasmania, Victoria and Western Australia all feature a Union Jack in the top left hand corner. New Zealand and its overseas territories, the Cook Islands and Niue feature the flag. Fiji and Tuvalu also feature the Union Jack. In Canada, the Union Jack is found in the provincial flags of British Columbia, Ontario and Manitoba. It is also Canada's Royal Flag. 4 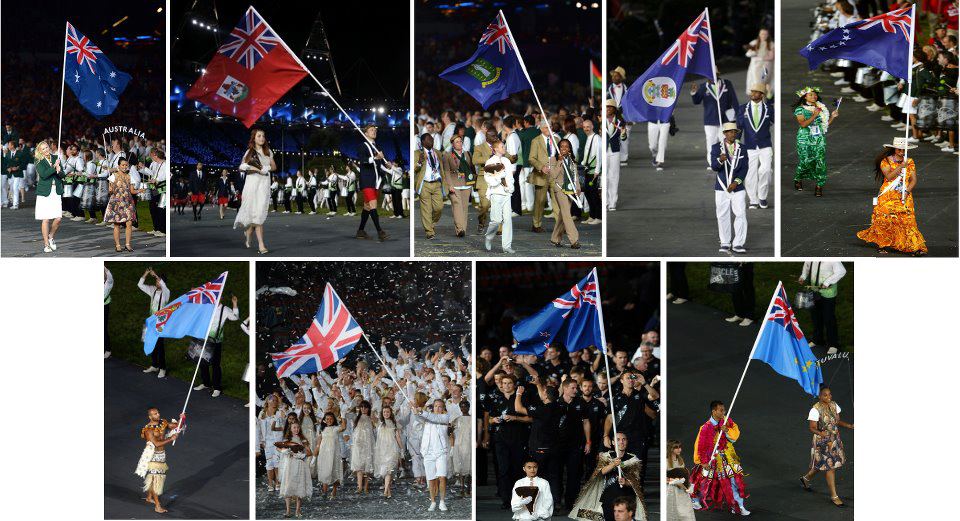 THE UNION JACK and the FAR-LEFT
Far-leftists like Billy Bragg, who is anti-Union Jack but who thinks he can fashion a far-leftist love for the Cross of St George by emphasising England's "radical left tradition" are raising interesting historical matters but are wasting their time as far as getting the far-left interested in flags is concerned!

The far-left is inherently "anti-flag" in any form -- the far-left consider flags, generally, to be the imperial symbols under which the capitalist class exhort the workers of the world to kill each other, and to be symbols of nationalism and exclusion. 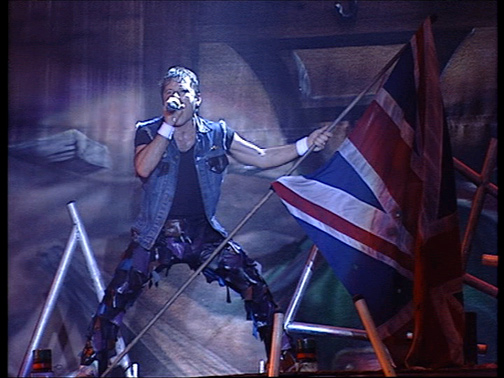 HOW to FLY the UNION JACK the RIGHT WAY UP
The broader white diagonal stripe should be uppermost in the corner at the top of the flagpole.

Left: Bruce Dickinson, lead singer of Iron Maiden, has been performing one of the greatest Heavy Metal pieces of all time, The Trooper, while waving the Union Jack enthusiastically on stage throughout the world for over 25 years. Thanks to Iron Maiden and its song of the same name, for the inspiration for the title of this article.