A Force For Good: Why Scotland should remain in the Union 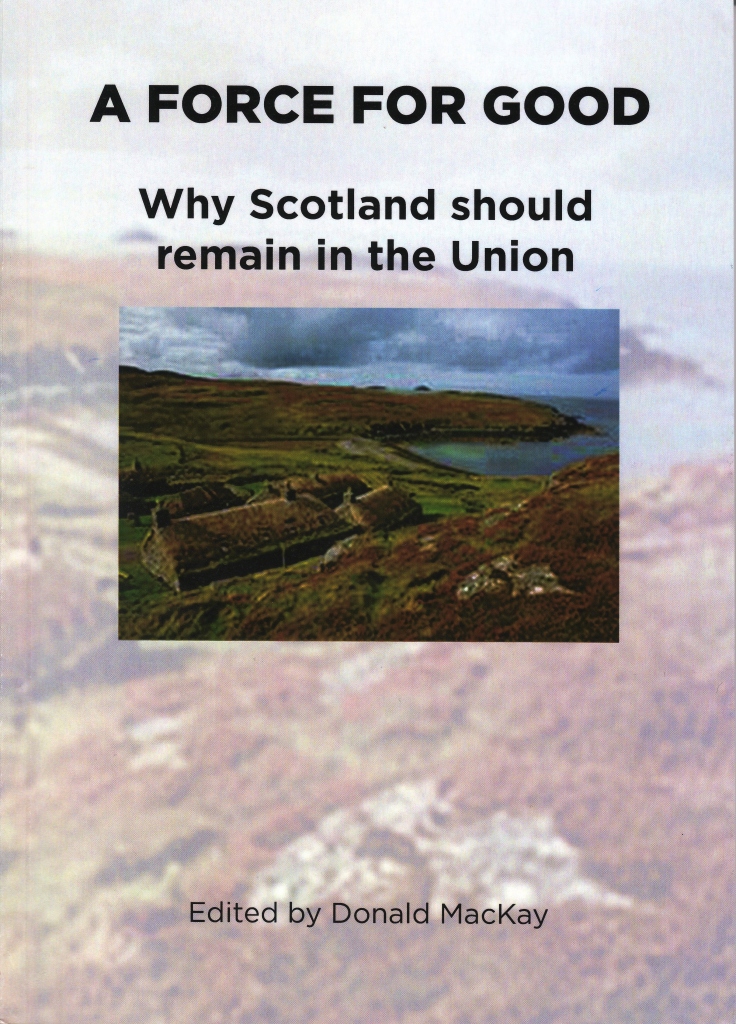 An excellent 84-page booklet has been released today (4 Feb 2013) which helps to promote the positive case for the Union and which explains reasons to keep Britain united, says Alistair McConnachie. Posted 4 February 2013.

We're pleased to announce the publication of an 84-page booklet today, which is the brainchild of one of our colleagues, Donald MacKay.

This Booklet is free, on request, to anyone who requests it after donating £25 or more to our work.

Using 11 essays by 6 different people (and we declare an interest since we contributed 4 of them) it argues, from various perspectives, that the United Kingdom is truly a force for good and that ordinary Scots can maintain their identity within a United Kingdom.

One thing which is notable about this booklet is that the essays present a philosophical basis for the union of Britain.

There are no essays here on the cost/benefit analysis, or supposed tax differentials, or the long-term sustainability of North Sea oil. Important as all of that is - in this booklet, you'll instead find articles which help to ground the reader in pro-UK ideology and thought.

As Donald MacKay writes in the Introduction:

This short book is a collection of essays by ordinary Scots who believe passionately that Scotland should remain an integral part of the United Kingdom and that the Union on the whole has been and continues to be a force for good.

Such a view does not preclude any kind of constructive criticism about our British political system and Scotland's particular role within that system but nonetheless recognises that one does not relinquish in any way a sense of Scottish identity by being British and proud of our nationality.

This is not an academic tome designed to be analysed by the great and the good. We do not seek any personal advancement and simply wish to present a series of thoughts about a subject that matters.

The initial impetus for the work came from an ordinary working class Glaswegian called Jim McKenna [to which the book is dedicated]. Jim lived originally in Dalmarnock and latterly East Kilbride. He was a true patriotic Briton and noted with dismay the manner in which his fellow Scots had, during his lifetime, allowed their loyalty for Britain to falter. Jim died in 2009 at the age of 62 and his essay 'Fly the Flag' is the first in this book. It was written shortly before his death and I have included it just as he wrote it.

We would add that Jim was also a friend of ours, and it is with fondness that we recall sitting speaking to him in the Babbity Bowster, in Blackfriars Street, Glasgow, in 2008 urging him to put his thoughts on the Union down in writing. We had no idea that he had so little time left. He produced the above essay a month later. He is also the author of the acclaimed Last Exit from Bridgeton: an East End Childhood Remembered his memoirs of growing up in Glasgow (foreword by Lorraine Kelly).

Please remember, this Booklet is free, on request, to anyone who donates £25 or more to our work.

If you like what we say, please support us by signing-up to receive our free regular Update email - which will keep you informed of new articles and relevant pro-UK information - by entering your details in the 'Subscribe' box at the top right of this page.
You can find out more about AFFG at the About and Contact page.