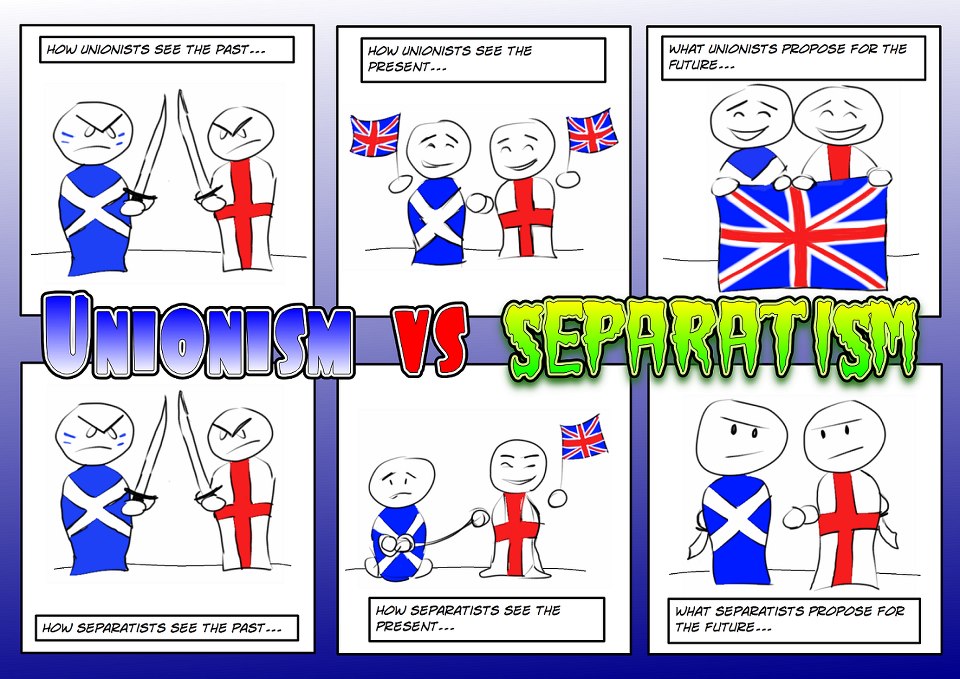 The following article, which outlines some of the core fundamental philosophical beliefs of UK unionists, was written by Alistair McConnachie and was posted on this website on 20 April 2012. It helps to explain why we want Scotland and England to remain united, and it has since appeared in the booklet A Force For Good: Why Scotland should remain in the Union. There are many articles throughout this Website which have since developed upon these principles. For example, see our Speech in London on 18 June 2015 One UK: The British Union from 30 First Principles and our submission to the House of Lords of 30 September 2015 The UK is a Unitary State: Submission to House of Lords Inquiry on 'The Union and Devolution'.

OUR TERMINOLOGY
Britain is a multi-national nation, and not merely a political state.

We use the term Britain as shorthand for the United Kingdom of Great Britain and Northern Ireland.

When we use the term United Kingdom, or UK, we also do so in the sense that it is a nation and a country, and not merely a political state.

So, Britain is shorthand for the UK, and it's our country. We don't want to see our country broken up and destroyed.

Those who want to break away from the rest of Britain call this "independence" for Scotland. From the perspective of those who want Britain to stay together, such a move is clearly "separation". Thus we use the term "separation" and "separatists" to describe this approach and such people.

We talk about the "separation referendum" or the "unity referendum" because the choice is to either break up the country, or stay together.

What do we call ourselves? Prior to the 1997 devolution referendum, few people actively thought of themselves as "unionists", or gave much thought to "the Union" per se. Just as, for example, Americans today do not talk about themselves as "unionists" just because they believe in the United States of America - as a label, it seems redundant. Therefore, while we use these phrases occasionally in this website, we do not label ourselves.

We put Britain, centre-stage, not "the Union" per se. We don't make a question out "the Union". The Union is taken as read. It's obviously a good thing, intrinsic to our country. In that sense, you could call us "Britainists" who support "Britainism".

WHAT WE WANT
We want our country to stay together. We do not want to see it destroyed.

We want peace and stability in the island of Great Britain. The Union is the best mechanism to ensure relative harmony because it enables different, sometimes conflicting, identities to swim in a large pond rather than being forced to confront each other in a small bowl.

This arrangement has been primarily responsible for delivering peace and stability within the island of Great Britain since the mid-18th century. Contrast this with the civil war in Ireland, which was, and is, a direct consequence of its broken relationship with the UK. We don't want conflict again on this side of the Irish Sea.

There is a danger that if Scotland were to separate then the loudest and nastiest voices in the separatist, anti-Britain camp would tend to dominate Scotland's future direction - and it only takes a few hundred people to set the course of a nation. History tells us that most moderate people are simply too scared to challenge those who are vicious.

We want an island home that we can relax in, not one which is constantly unsettled, or one in which we have to obsess about our presumed different interests or our identities, or one where a portion of the population has been taught to consider a British identity to be something foreign to oppose - in the way that much of Ireland became after breaking away. It took only 27 years (one generation) for the Irish Free State to become the Irish Republic.

We want British evolution, not more Scottish devolution. The alternative to Scottish separatism is not to pour more fuel on the fire of asymmetrical devolution, but rather to find ways to integrate elements of Scotland into the UK body politic. For example, how about a unity proposal being the second question on the ballot paper!

WHAT WE BELIEVE
Britain is a natural and evolving organism which should be tending towards unity. It is not, as the separatists imagine, a temporary arrangement with an inevitable fate of separation.

The constituent nations of the multi-national nation of Britain are related as in a state of marriage. That means it is not appropriate for one nation to put itself first without due regard to the other members of its family. Once it imagines it has a right, or attempts to do so, then the marriage becomes corrupted and fall-out becomes inevitable.

A problem in any part of Britain is a concern of us all, and the challenges which confront all of us throughout these islands are most effectively resolved by working together. A Scotland within a united Britain is a better place, and a more effective place, in which to live, than a Scotland separated. Britain united is greater than the sum of its parts.

Britain is the best nation within which to accommodate diverse identities. It's big enough to allow for English, Irish, Scottish and Welsh identities, and all the variations within them to exist. However, it does not work the other way, as Ireland has clearly demonstrated. When you remove fish out the big UK pond and put them into a small bowl, then the differences within the bowl are amplified and they start eating each other.

Finally, we are Anglophiles. We like England and we like the English - and, of course, the Welsh and the Irish! We are happy being in a Union with England, travelling to England, working in England, and having English friends and in-laws. That has to be said because there is no doubt that many of the separatists are, sadly, Anglophobic to varying degrees, whether anti-English or anti-England. The last thing we want to see is their sour attitudes parading openly (and not just on the internet).

WE ARE THE BRITS

A thousand years in just one place.
We kept it strong, we kept it safe.
This rough and tumble island race,
Surrounded by the sea.
Spanish Armada, Nazi bombs,
We stood together, proud and strong.
We kept these islands all along,
Sovereign and...
Free as the ocean that surrounds us.
We are who we have always been.

God save our gracious Queen.
Long live our noble Queen.
Send her victorious,
Happy and glorious,
Long to reign over us,
God save her.

Britain sleeps safe at night.
Young men stand ready to fight,
Those who would do us harm.
Freedom assured by force of arms.
Soldier, sailor, RAF,
We walk free, they stood the test.
Toughness, courage, humour, soul,
And our boys in Helmand - still on patrol.
While their families wait and wonder,
But they don't make a fuss of it.

If you like what we say, please support us by signing-up to receive our free regular Update email - which will keep you informed of new articles and relevant pro-UK information - by entering your details in the 'Subscribe' box at the top right of this page.
You can find out more about AFFG at the Contact and About page.