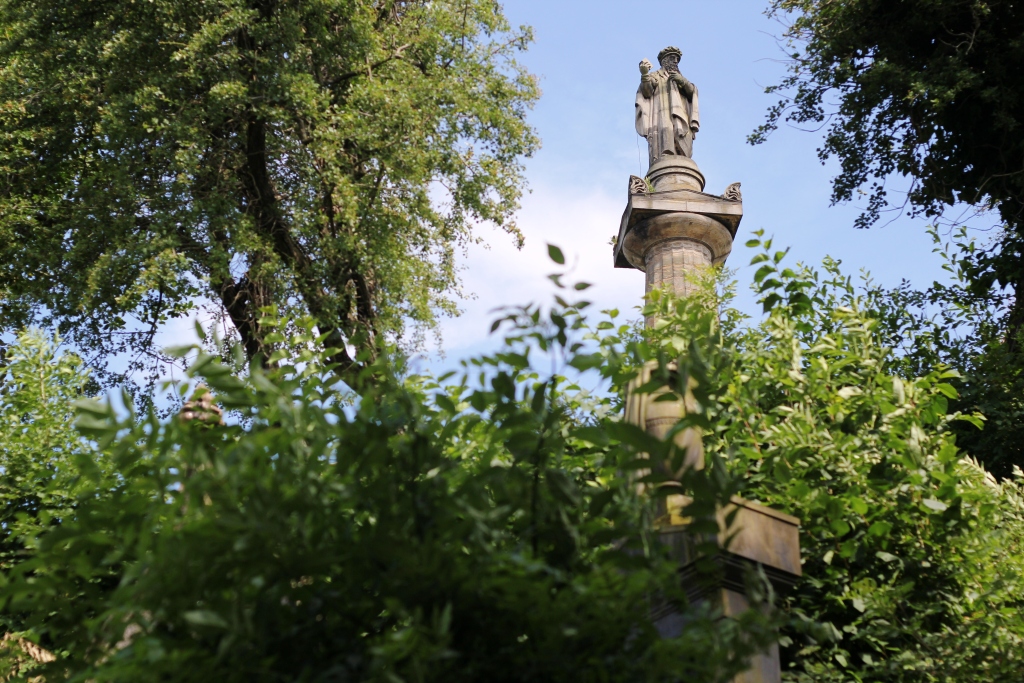 A Force For Good presents the fourth in our chronological 7-Part series entitled, "The Scottish Origins of British Unionism", written by John Provan, who has an MA (Hons) in History.

Here we examine John Knox, a complex and powerful character in Scottish and British history, a man who elicits mixed opinions, and whose role in our national story cannot be ignored. In this article, John Provan highlights Knox's desire for Scotland and England to join together in union through a shared monarchy and faith.

Picture: The 60ft statue of John Knox at the top of the Glasgow Necropolis. This was the first statue to Knox in Scotland and was erected on 22 September 1825. The sculptor was Robert Forrest. (Pic copyright: Alistair McConnachie, 14-7-13.)

John Knox (c. 1514 – 24 November 1572) is well known as a Protestant reformer, the champion of Scotland's Reformation, and the man who laid the foundations for a Presbyterian Kirk.

Having been inspired by the theologian John Calvin, Knox devoted his life to spreading the Protestant faith throughout not just his native Kingdom of Scotland, but the whole of Britain.

Although he is best known for his role in the Scottish Reformation, he was equally active in England, where he served as a royal chaplain to Edward VI. He helped formulate the Book of Common Prayer, which remains central to worship in the Anglican Church today (albeit in a revised form). Knox would even go on to marry an Englishwoman, Margery Bowes, by whom he had two children. It is no surprise then, that Knox should remark:

Sometime I have thought that impossible it had been, so to have removed my affection from the realm of Scotland, that any realm or nation could have been equal dear to me. But God I take to record in my conscience, that the troubles present (and appearing to be) in the realm of England are double more dolorous unto my heart than ever were the troubles of Scotland. 1

Having forged many personal ties across the two kingdoms, and played such a crucial role in bringing their people together in a shared Protestant faith, Knox came to the opinion that a union between them would be the best way to build a future together.

This is evident both in his lamenting of missed opportunities to create such a union, and his calls to actively forge one.

A LOST OPPORTUNITY
The 'Rough Wooing' (December 1543 – March 1551) was a period of warfare between the Kingdoms of England and Scotland, as Henry VIII of England tried to force a marriage between his son and Mary Queen of Scots, who was still in her infancy.

His aim in doing so was to bring both kingdoms under a single monarch, and pave the way for their eventual unification. Many Scottish Protestants desired to see this union brought about, as they had faced persecution under the Catholic monarchs ruling from Edinburgh.

In his famous tract 'The First Blast of the Trumpet Against the Monstrous Regiment of Women', Knox himself lamented that such a union had never been realised:

even so hast thou most justly now punished the proud rebellion and horrible ingratitude of the realms of England and Scotland. For when thou didst offer thyself most mercifully to them both, offering the means by which they might have been joined together for ever in godly concord, then was the one proud and cruel, and the other inconstant and fickle of promise.

In Knox's mind, this opportunity to forge a union was a great gift of God's providence, the rejection of which the peoples of Scotland and England had both suffered for. In Knox's 'History of the Reformation of Religion in Scotland', he again makes reference to the Rough Wooing, in which he depicts the opportunity for union as a gift given from God:

King Henry sent with him his ambassador, Sir Saddler, who lay in Edinburgh…his commission and negotiation was to contract a perpetual amity betwixt Ingland and Scotland. The occasion whereof God had so offered, that to many men it appeared that from heaven he had declared his good pleasure in that behalf.

Knox leaves no ambiguity as to his own feelings on the matter, going on to call it a "wonderful providence of God", which men of "good conscience" would surely embrace, considering the peace and prosperity which it would bring to both kingdoms:

This wonderful providence of God caused men of greatest judgment to enter into disputation with themselves, whether that with good conscience any man might repugn to the desires of the king of England, considering that thereby all occasion of war might be cut off, and great commodity might ensue to this realm.

In a similar vein, Knox viewed King Henry VIII of England in a positive light, and thought his demands for a marital union to be not just reasonable, but desirous for the peace and security of both the kingdoms.

It is clear that Knox viewed union as a way to secure the victory of the Reformation within both England and Scotland, as well as to pull Scotland out of the French sphere of influence, and to secure its role in a strong, Protestant Britain.

The Scottish people had long suffered as the weaker partner in the Auld Alliance, with their land being used as a staging post for invasion of England, and their people as fodder to distract English armies on their northern frontier. Nobody wanted a repeat of Flodden, when around 14,000 Scots died in a hopeless invasion of England called for by their French allies.

With these things still fresh in the popular consciousness, Knox thought union with England to be the best way to prevent further disasters, and all who "loved quietness" would be of a like mind:

The offers of king Henry were so laige, and his demands so reasonable, that all that loved quietness were content there-with.

There is no doubt then, that Knox wished for Scotland and England to be united during the Rough Wooing. But union for him was more than a lost cause to lament, because he would continue to advocate for union throughout his life.

HOPE FOR FUTURE UNION
Knox's commitment to union continued even when the political circumstances in Scotland were drastically different.

At the time of the Rough Wooing, Scotland had been under a regency for a Catholic queen, and perhaps union seemed the only way to end the persecution of Protestants.

But even when Knox and his rebels were on the cusp of taking power little over a decade later, he remained determined to bring about a lasting union with England.

He continued to speak of "a perpetual concord betuix these two Realmes", and that this was a "mater in which I have laubored ever sence the deathe of King Edward". 2

At the height of the rebellion of Knox and his followers (1559-60), his congregation wrote a revealing letter to Englishman William Cecil, in which they spoke of a "confederacie, amity, and leigue" between their two kingdoms, which was to be effected "for God's cause". 3

Their vision of union was also seen as being different from those which went before, which had often been based on a desire for worldly power or conquest. They took care to contrast their own desire for union with "the pactions maid by wardlie men for wardlie proffeit". 4

In this regard, Knox and his followers are part of the tradition within Scottish unionist thought, which rejects an imperialist interpretation of union, and instead seeks one based on friendship and a shared destiny.

It is somewhat ironic, that when a more full political union was achieved in 1707, unity in religion was not part of the package, preserving as it did the mutual independence of the Church of Scotland and its Anglican counterpart.

3. Mason, R., 'The Scottish Reformation and the origins of Anglo-Scottish imperialism', p.180 in Scots and Britons: Scottish Political Thought and the Union of 1603, ed. by R. Mason (Cambridge University Press, 1994).