Stand Up, if you Love England 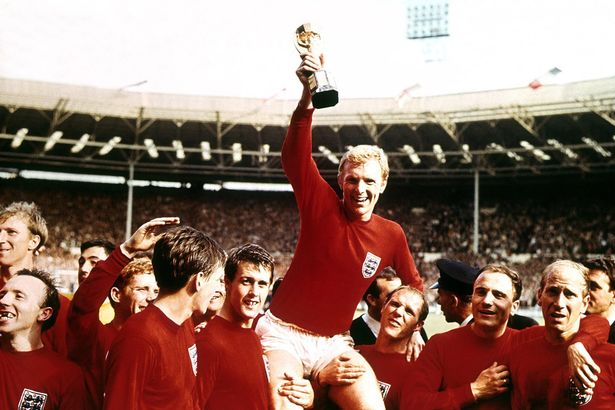 Scots support England at sport because England is part of the same country as Scotland - called Britain, says Alistair McConnachie. The following was updated on 16 November 2013, posted on this site on 21 March 2012, and a version published in the June 2006 issue of Sovereignty.

On the 19 November 2013, England will be playing Germany at football. I'll be supporting England. Why do I support England at football games, or the World Cup, or rugby or any other sporting endeavour? That's not something for which I would normally attempt an intellectual explanation - it just comes naturally.

It seems obvious to me to support the land of my closest neighbours, my family members, my friends, my fellow Britons.

Ultimately, if I rationalise it, I support England, because England is part of the same country as Scotland - called Britain!

I support my fellow Britons on the worldstage. It's no more complex than that! Kind of obvious, really!

In that regard, not supporting England seems incomprehensible to me - so rarely do the British get a chance to shine worldwide.

That's one of the Great things about being British.

Scotland and England are different countries, but uniquely we are blessed by the fact that we are also part of the same country.

A British identity provides each of us with a shared inheritance which is ours, by natural right, as a Briton.

That means, whatever is English is part of a Scot's inheritance. Whatever is Scottish is the inheritance of an Englishman.

This sense of identity can only be enriching for us all.

This shared inheritance is available within the identity of Britishness but it is not available to those who identify only with one area of our island archipelago. A British identity allows for an English, Irish (all sorts), Scottish or Welsh identity to exist within a wider identity. Thus a British Scot can delight and rejoice in the success of the English football team - or share the sadness and pain of its travails - because it represents an extension of his or her own national identity in the world.

A British identity widens one's horizons and it enables us to transcend any differences.

An identity which allows one to automatically bond with the other 60 (plus) million people who are living in the same islands as oneself is a valuable identity!

Indeed, being British is Great.

"But there is no such thing as 'Britishness'", some say.
Yawn! Only to the extent that there is no definitive definition of Britishness. However, the exact same thing could be said about "Englishness", "Scottishness", "Irishness" (especially!) or "Welshness" - all of these identities contain similarities, differences, diversities, inconsistencies, ambiguities, even contradictions.

Yet Britishness unites them all.


FOOLISH FIRST MINISTER PLAYS WITH FIRE
Of course, there are some anti-English types in Scotland, but there are plenty of us who support England.

In that regard, we were dismayed, back in 2006 at the then First Minister Jack McConnell's stupid intervention in the World Cup, claiming that he would not be supporting England - even though he perhaps meant it in some kind of "jokey" way. For a Minister of the British Crown to make such a foolish public statement was poor form indeed.

As Scotland's foremost politician at that time, he should have been at the forefront in creating alliances in the public mind with England - if only for the sake of tourism in Scotland and Gordon Brown's political aspirations in England!

Rather, what McNumpty succeeded in doing, very successfully, was putting an official seal of approval on the mainstreaming of anti-English sentiment, thereby encouraging it, and its commercialisation, in the public space - creating a somewhat unpleasant atmosphere for some English people in Scotland, as well as us Scots who support England.

"no difficulty - watching from the other side of the Atlantic - in wanting England to win. I only wish more of my fellow-Scots, in and out of politics, could take the same broader British point of view...Why should we not be big enough to wish England well...The genuine tragedy is that we are all trying to promote Scotland's image abroad and we are being perceived as sour and grudging. Being Scottish is not about being anti-English...The danger is that such a perceived anti-English posture could encourage the irresponsible." (Henry McLeish, "Kick politics of envy into touch", Scotland on Sunday, 25-6-06.)

However, it should be said, there are also English people in England who have a problem supporting their national teams. The June 2006 edition of Red Pepper magazine had an article between two English lefties earnestly debating whether it's ethical to support England at the football World Cup!

One well-heeled woman, trying and failing to square what to her was the contradiction of our being middle-class metropolitan types and yet simultaneously happy to wrap ourselves in the flag, asked my wife if our car was "an ironic statement". Someone else confided to me that a part of him was always willing England's opposition to score, and surely I felt the same? Er, no, actually," I said, "I always want England to win 10-0." He looked perplexed and giggled nervously, choosing to assume I was joking. It's peculiar, isn't it, that in England, unlike any other country I know of, the gain of a little education, a little upward mobility, so often seems to entail the loss of the simple human desire to take pride in place? Peculiar, and sad. (Robert Crampton, "Dad, how come rich people don't fly flags and show they're patriotic?" The Times, 21-6-06, p.21.)

BEING ENGLISH IS FOR LIFE, NOT JUST FOR FOOTBALL
Thankfully, it seems those people are in a minority!

We were in England during this time, and we were happy to see all the St. George flags. (Although, as we have stated here, it is also proper for English, and Scottish, and Welsh and Northern Irish fans to fly the Union Jack too, in support of their favourite teams.)

Patriotism is about supporting our country - both of them - by using our commercial power wisely - by buying local and national. It's about having civic pride, caring for the environment, remembering national days and commemorations, taking an interest in our history, and valuing meaningful national traditions, icons and institutions. Taking pride in place!

Also see a collection of articles by Scots who support England including:
"Kick politics of envy into touch" by Henry McLeish,
"Jack McConnell should set an example" by Peter MacMahon, and
"Be Ashamed if you hate England" by Alastair McKay.

England is perhaps the only great country whose intellectuals are ashamed of their own nationality. In left-wing circles it is always felt that there is something slightly disgraceful in being an Englishman and that it is a duty to snigger at every English institution, from horse racing to suet puddings. It is a strange fact, but it is unquestionably true that almost any English intellectual would feel more ashamed of standing to attention during 'God save the King' than of stealing from a poor box.


George Orwell, from his essay "England Your England", first published in his booklet The Lion and the Unicorn: Socialism and the English Genius, (London: Secker and Warburg, 1941).