2014: The Year the Union Jack makes its Scottish Comeback 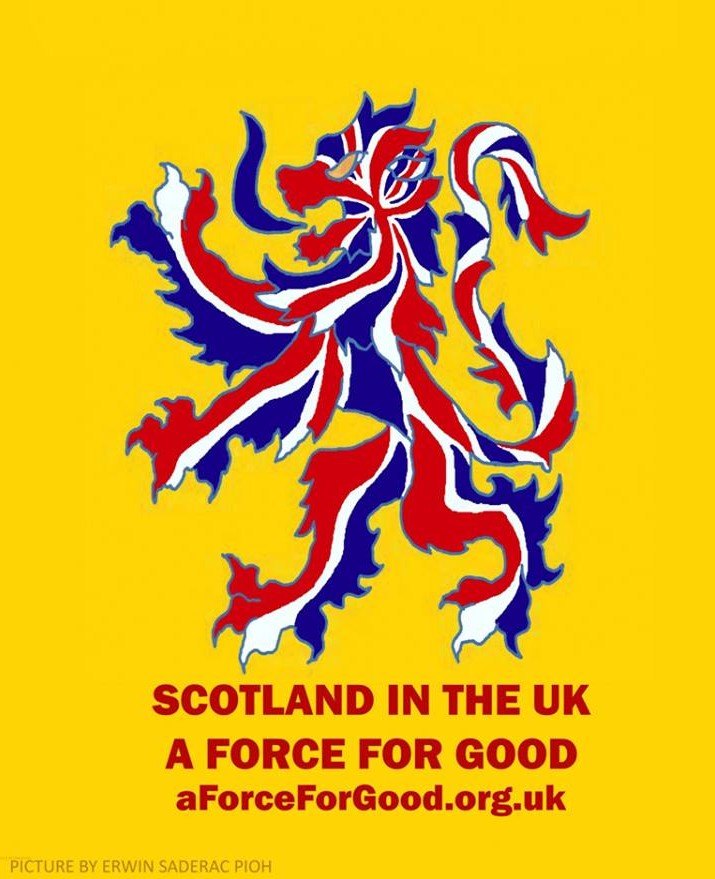 The easiest way for Unionist-controlled councils, government buildings, sympathetic private organisations and individuals in Scotland to show support for the United Kingdom is to run the Union Jack up the flagpole, hold it in your hand, or wear it on your body. And if we do this then 2014 is going to be the year when the British Flag makes its comeback in Scotland, says Alistair McConnachie.
Posted 17 December 2013.

Lately we've spotted several indications that the National Separatists identify "signs of Britishness" in Scotland with how often they see the Union Jack – either flying from flagpoles, or in other forms.

They have a point!

In this article, we examine some examples of "missed opportunities" by public and private bodies to fly the Union Jack and show support for the United Kingdom.

First though, let us look at what the National Separatists do…

THE CULTURAL AGENDA of the NATIONAL SEPARATISTS
Flags at the so-called "Border"
Take the so-called "border" between Scotland and England. It was brought to our attention recently (September 2013) that the southbound traffic lane as you go into Northumberland on the A1 has 3 flags flying, the Union Jack, the Cross of St George, and the old Kingdom of Northumbria flag. That makes good sense and is a nice cultural message which is pleasingly welcoming to all.

However, get this: The northbound lane also has 3 flagpoles, but all three are flying the Saltire.

Clearly, if you are English (and that is who this overt and deliberate display of Scottish Separatism is directed at) then you are meant to feel that you are now entering a country which is somewhat foreign to you – and it is trying to be foreign to you. It is deliberately trying to assert a difference, and if that irritates you then that's your problem.

Many English people will, naturally, feel a little bit defensive about that, and they would be right to be unnerved. Such a blatant cultural assertion does nothing good for overall British relations.

So who is to blame for this?

Is it a deliberate ploy by the SNP-led coalition on Scottish Borders Council, who oversee that part of the A1 road?

If so, it is a good example of the reality of voting for the SNP: You vote for an SNP councillor because "he seems like a nice man", or "he helped fix the pavement"; but once in power he puts up flags intended to make the English feel strangers, and upset peaceful relations.

That is the reality of SNP cultural nationalism.

As soon as the SNP gets into any kind of power, whatsoever, they start peddling their cultural nationalism. As soon as they achieve any power, anywhere, they push their exclusive Separate-Scottishness Agenda down everyone's throats.

Postscript: This article from the Berwickshire News of 18 December 2014 "Why are three saltires needed at the border?" states "although Scottish Borders Council had been responsible for putting up the original three flagposts, it was now the Scottish Transport Minister who decides what flags are flown on the border crossing." Our point remains valid. If you vote for the SNP either at a local or national level, it will push its cultural nationalism at every opportunity.

Here is another example.

St Andrew's House, Edinburgh
St Andrews House is a big, imposing government building on route to Calton Hill in Edinburgh. It was officially opened by King George VI and Queen Elizabeth on 26 February 1940 as part of Britain's network of government. It has 4 flagpoles.

When we attended the March and Rally for Independence" in September in order to report on it for this website, we noticed that every single one of these flagpoles is flying the Saltire.

We can only presume it is because it contains the office of the First Minister, and Deputy First Minister of Scotland and they have decreed that the Union Jack will not fly.

Again, here is the reality. As we will never tire of pointing out: people who vote for the SNP because they think they will make the buses run on time need to realise that a vote for the SNP is a vote for a cultural nationalism which will entirely exclude any elements of Britishness where it can do so.

The nationalists want to push out any reminders of Britishness wherever they have the power and opportunity to do so. Vote for the National Separatists and you will get the de-Britishising of Scotland.

UK GOVERNMENT BUILDINGS
Edinburgh Castle
The Castle is a British Army base. When we lived in Edinburgh during the 1990s, the Castle used to fly an utterly massive Union Jack which must have been about the size of a billiard table. Now, the Union Jack is so small that it may as well be a Skull and Crossbones, because it cannot be seen from Princes Street. We are not joking when we say it must be the size of a tea towel. It is not recognisable as a Union Jack unless you get into the forecourt of the Castle itself, and then you have to strain your eyes! The flagpole may as well be bare.

Perhaps this has something to do with an attempt to appease the National Separatist executive at the foot of the Royal Mile – we really don't know. We were shocked that the flag pole appeared to be bare on the day that the Queen was in town for her Queen's Garden Party on 2 July 2013 (or if it was flying, it was so small as to be imperceptible to the human eye from Waverly Station).

It is important though, for UK government buildings in Scotland to make a show of the Union Jack in 2014 and thereafter. This includes all the Unionist-controlled Council Offices and Buildings. Hitherto, many of them have fallen down on this most basic, but hugely effective, tactic!

UNIONIST-CONTROLLED COUNCILS MISSING OPPORTUNITIES
Separatists can be expected to push out the Union Jack. That's their thing. Vote for them, and that is what you will get.

However, what should not be expected is Unionist-controlled councils missing perfectly good opportunities to fly it on their buildings.

For example, Glasgow is a Unionist-controlled council.

It has 4 flagpoles. Every one of them (in December 2013) is flying the Saltire! Even from the simple point of view of attracting tourists, this seems misjudged. There are English, Welsh and Northern Irish visitors to this place every day.

It is strange. We're prepared to bet there is not a single museum in the whole of England which flies 4 St George Crosses!

It is as if the people who run this Museum (ultimately the Council) have no regard for the message they are giving to its visitors. With 4 flag poles you could have a Union Jack to show solidarity and a welcoming attitude to people from all over the UK, you could have a Saltire to show the Scottish angle, you could have Glasgow City's flag, and a fourth flag of your choice.

Next year, its grounds will be a (British) Commonwealth Games venue with tens of thousands of people passing through it and millions seeing it on television. That represents a perfect opportunity to get the Union Jack, and a pro-UK message, into the public eye.

Interestingly the Kelvin Hall Sports Arena across the road has 4 flagpoles but only flies two flags – the Union Jack and the Saltire. So there is a precedent for getting it right there.

Of course, if you take down one Saltire and raise a Union Jack in its place then the National Separatists will squeal that "you're taking down Scotland's flag". In reality though, we are putting up another of Scotland's Flags.

Murrayfield Stadium, Edinburgh
The centre for Scotland's national rugby team has 4 flagpoles. When we passed it in September 2013, there was a Saltire on one, and what looked like a couple of corporate flags on two, but the extreme left flagpole – where the Union Jack is meant to officially go – was empty.

We are presuming the management board, which controls the stadium, has a nationalist majority. Otherwise there is no excuse for this missed opportunity.

Merchant's House, Glasgow
This year, Merchants House – which overlooks George Square – had (we presume) forgotten to fly the Union Jack on the Armed Forces Day event in George Square (29-6-13), although it did so in 2012. Or perhaps the Board of Management has changed to a nationalist majority?

A HANDY VISUAL WAY TO SUM UP WHAT WE STAND FOR
As the referendum approaches, it might be objected that we are reducing a complex economic, political, legal, constitutional debate to the mere matter of "flags"?

Not so! As we have noted, the National Separatists gauge the measure of support for the United Kingdom in proportion to the number of Union Jacks they see in Scotland. They do this, and they are correct to do this.

They want to push out all reminders and symbols of Britishness from the public sphere wherever they have the power to do so.

They have a very exclusive view of identity. They have no grasp that the Scottish identity is, for those who want it to be, part of an inclusive British identity, represented by the Union Jack.

We who believe in the Union have a very convenient, well-known, dramatic symbol we can use to "sum everything up" – the Union Jack.

Unionist-controlled councils, government offices, and unionist-controlled management boards of appropriate private sector companies and organisations are really missing a very powerful tactic if they do not make sufficient use of their buildings and flagpoles to promote Scotland's place within the Union, next year and beyond.

Let's ensure that 2014 is the year when the Union Jack makes its Scottish comeback.

If you like what we say, please support us by signing-up to receive our free regular Update email - which will keep you informed of new articles and relevant pro-UK information - by entering your details in the 'Subscribe' box at the top right of this page.
You can find out more about Alistair at the Alistair McConnachie page. And here is a link to Alistair McConnachie's Google Profile.