Importance of the British Armed Forces to the Union 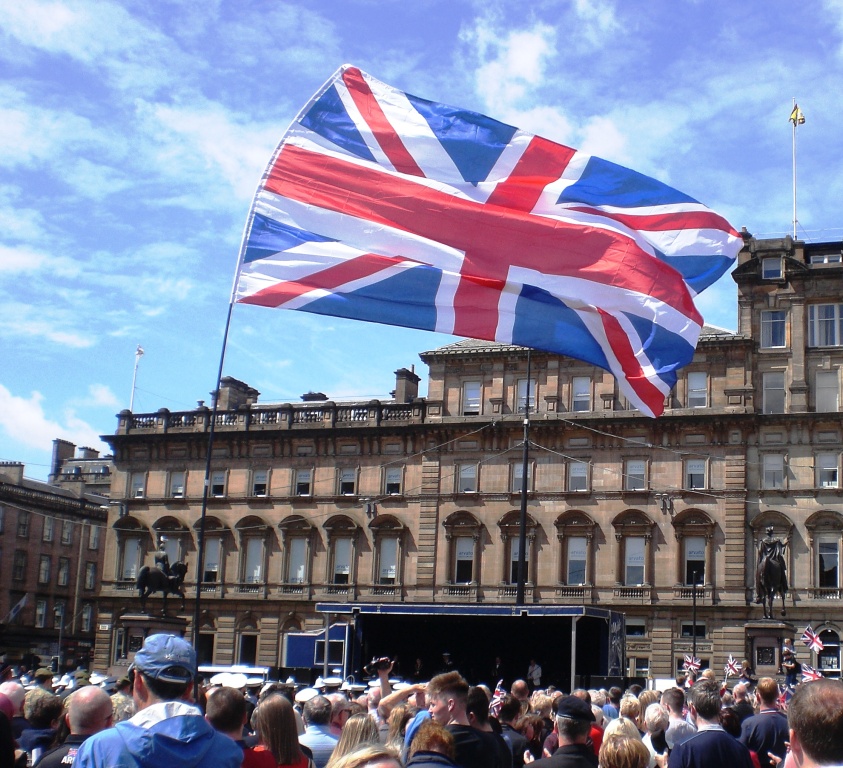 The following has been written by Alistair McConnachie in association with Richard Tallach.

Saturday 24 June 2017 is Armed Forces Day throughout the United Kingdom. For several years now, Glasgow has always hosted a static military and supporters' Display in George Square, which includes a Parade at 1 o'clock, a military band, speeches and a flyover. (The pics on this page are from the event in 2015.)

This year, on the day, there is nothing. No static Display, and no Parade.

We contacted Glasgow Council to find out why and we received the following (email dated 20-6-17):

...unfortunately there will be no armed forces parade this year, the format had to be changed due to resource cutbacks from the Ministry of Defence.

When we enquired whether there would be a static Display in the Square itself, we were told: "Unfortunately there will be nothing in George Square this year." (email dated 21-6-17)

This "...due to resource cutbacks from the Ministry of Defence."

From a Unionist perspective, this is very troubling.

IMPORTANCE of the ARMED FORCES for the UNION


Armed Forces Day is one of those (few) opportunities where people like ourselves can come together and show support for British-wide institutions.

The British Armed Forces, particularly the Scottish regiments, are an important contributor to the cultural solidarity of the United Kingdom.

They are a form of "cultural glue" that binds the United Kingdom together.

The Scottish Regiments – and service in the British military generally – has always been an important way for the Scots to express pride in being both Scottish and British.

This has been true for those who have participated in military service and, also, for those of us Scots and other British citizens who just look on with admiration.

The political reality of the day is that the SNP and SNP-led councils throughout Scotland are doing their best to eviscerate all visible and verbal reminders that Scotland is British, in order to get as many Scots as possible to forget that they are British, and that Scotland is part of Britain.

That is what they seek to do, as much as it is within their power to do so, using the devolutionary powers that they have.

Given these clear political circumstances, we don't need to help them!

It makes no sense for British-wide government controlled institutions such as the Ministry of Defence, to fail to take advantage of those particular events – such as Armed Forces Day – which can help to counter this de-Britishing of Scotland.

Where there is an opportunity to promote British things, it should be seized – and Armed Forces Day is a perfect opportunity.

At this time – and especially in places like Glasgow – it is more important than ever for the cohesion and integration of the United Kingdom that the British government and the MoD consider not only the economic dividend that the British military gives to the Scottish economy by means of:

1. the building of warships, and the British military presence in Scotland; but also to consider...

2. the cultural and social contribution which the British Armed Forces make to that cohesion and integration by their ongoing augmentation by the MoD, and by their visible presence in Scotland.

For example, the visible presence of the British Army, Royal Navy, Royal Marines and Royal Air Force in Scotland (such as at Armed Forces Day) reminds Scots of their Britishness and encourages them in it; whether they strongly feel British, less strongly British, or are currently weak or apathetic in their sense of Britishness.

At a time of constant Scottish Nationalist agitation, it is important to take into account, alongside necessary economies and rationalisations of forces and resources, this important British cultural aspect of our military in contributing to British solidarity.

Therefore, it is disturbing, from a unionist political point of view, to see that the MoD has chosen not to do anything in Glasgow – of all places – this year in order to save a few measly pennies. 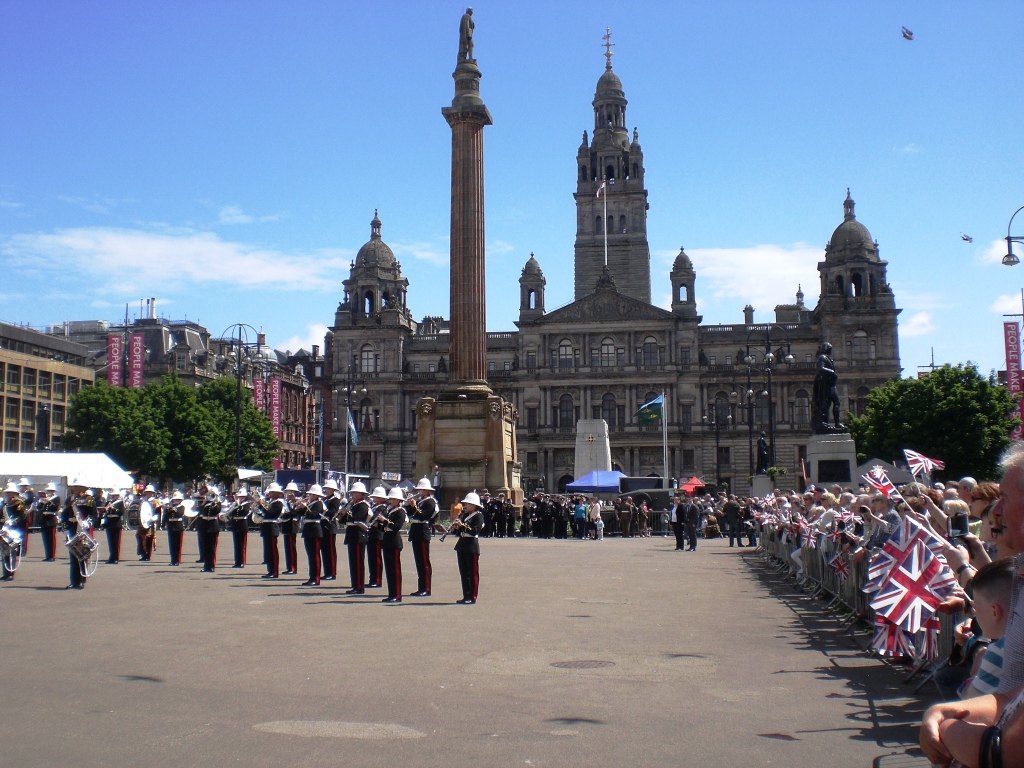 SUGGESTED MILITARY POLICIES for SCOTLAND and the UK
Here are some Policies for the Armed Forces to help further British-wide social cohesion and integration:

a) Military museums to be supported by government as an important part of our British heritage.

b) Recruitment drives carried out in city centres and other public thoroughfares, where many people will be reminded of Scotland's place in Britain, and in Britain's history and future.

d) London-based units such as the Scots Guards, Coldstream Guards (a Scottish regiment and the oldest in the British Armed Forces), and Household Cavalry units encouraged to display in Scotland more frequently.

e) It may even be possible to find the resources to return some of the old Scottish (and English, Irish and Welsh) infantry regiments to full strength and "take them out of moth balls", thus strengthening our military potential, while also injecting some further cultural glue into the British milieu.

Not only is it a false economy to reduce our infantry numbers at this time of rising world threats; but we are also reducing British cultural capital at a time of resurgent internal nationalism and thus imperilling the United Kingdom in a more subtle and internal way.

f) It should go without saying – but unfortunately it has to – that all British Military Bases, Barracks, Reserve Units and related MOD buildings in Scotland should fly the Union Flag prominently every day. This is not always done. If it is not internal military law, then it should be!

The public presence of British symbols and icons of various sorts at appropriate times and places should be something that is supported by those who love Britain and have a concern for the British Union, and have the authority to promote them.

For example, there are many more appropriate times and places in which the Union Jack, especially, could and should be flown in Scotland and throughout the UK.

Perhaps this will antagonise hardened Yessers, but it will help to draw out the latent Britishness of soft Yessers, remind them of their affection for Britain and the British from other parts of these Islands, and help to break down the Yes vote.

g) And of course, Armed Forces Day events should be held in all the major cities in Scotland every year.

These sort of things represent 'free' encouragement for pro-British people and a reminder to the many who are relatively indifferent of the great things about being British.

Being a form of indirect influence means it is often more effective to help encourage people to appreciate the Union.

Unionist politicians shouldn't shy away from finding appropriate ways to remind people that we are British and Scotland is British. They're missing a big trick if they do.

Let's remember that Nicola Sturgeon has said she would be most afraid of a campaign reminding people of the great things about being British. (1)

It is important for us to keep reminding ourselves!

It is important to keep rekindling our loyalty to Britain in the face of constant Scottish Nationalist grievance.

Reference
(1) See Ms Sturgeon's comments in "Scotland and the Battle for Britain", broadcast on BBC2 on Sunday 18 September 2016 at 8pm:

Ben Borland, "Did you just say that? Nicola Sturgeon caught out as she says it's GREAT to be British", Scottish Sunday Express, 18-9-16 at www.express.co.uk/news/uk/711800/Nicola-Sturgeon-says-great-to-be-british-independence-referendum-anniversary where the clip can be viewed.

Here's footage from the 2015 Armed Forces Day in Glasgow, including the National Anthem being played by the Band of the Royal Marines, and Parade footage.