Why the SNP Want to Stay in the Single Market 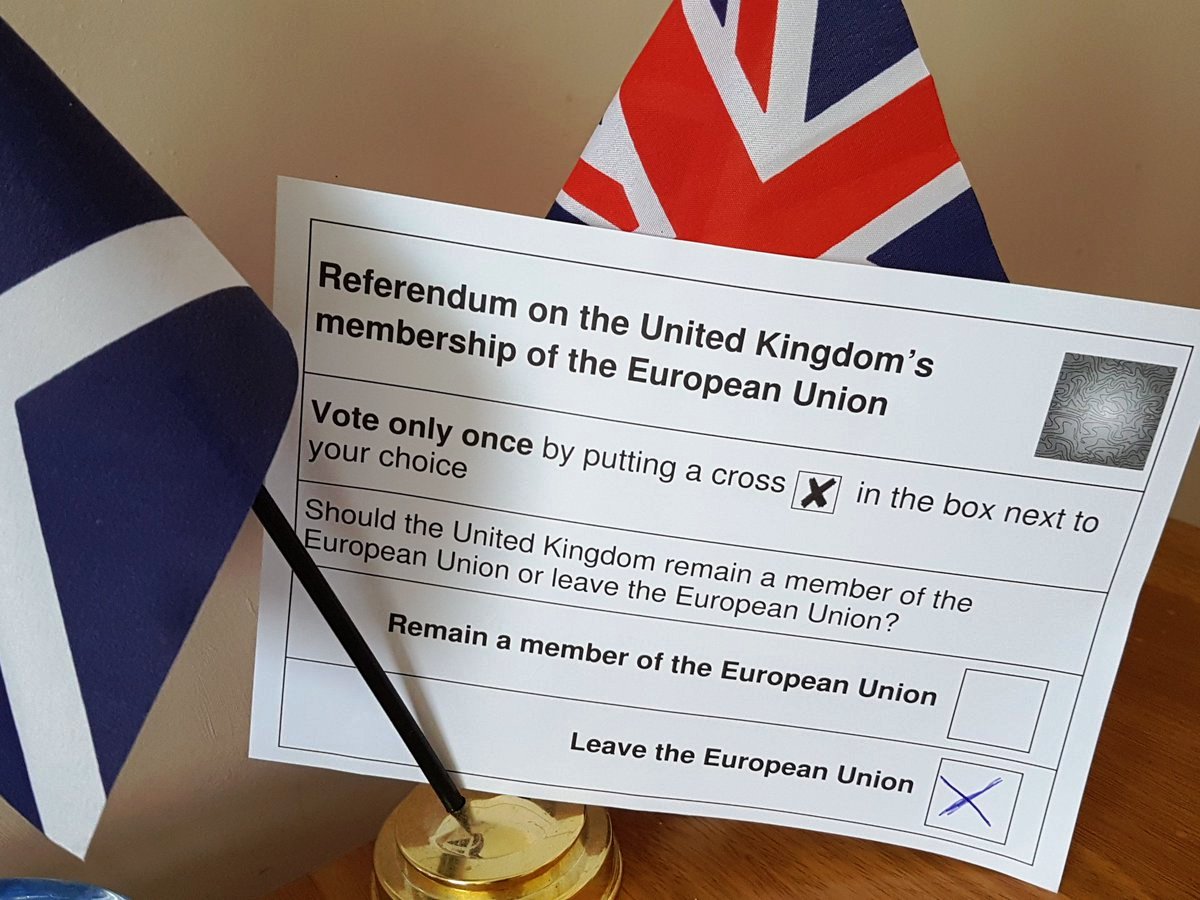 The SNP's enthusiasm for the EU Single Market has nothing to do with wanting the best for Scottish businesses, as Alistair McConnachie explains.

Pic: The question on the ballot paper on 23 June 2016 was 'Should the United Kingdom', not 'Should Scotland'. We all voted to make a UK-wide decision.

The EU consists of the Single Market and the Customs Union.

The Single Market is a common set of internal trading rules for every Member State. It consists of "the 4 freedoms": Free movement of goods, services, capital and persons.

The Customs Union is the scheme which sets the common external Tariff Barriers into the EU.

The European Commission negotiates for and on behalf of the Union as a whole in international deals, rather than each Member State negotiating individually. It is not possible for a Member State to set its own trade deals.

The Single Market and Customs Union are policed by the European Court of Justice (ECJ).

Leaving the EU – summarised as "Brexit" – means coming out the Single Market and Customs Union, being no longer subject to the European Commission and the ECJ, and paying no Membership Fee (currently around 17bn a year). 1

This has been called a "Hard Brexit", but it is really just "Brexit". It is simply what "leaving the EU" means.

In this article, we call it a "Full British Brexit".

A "Soft Brexit" is the term for coming out of the Customs Union, but staying in the Single Market and being subject to "the 4 freedoms" and the rule of the ECJ – which is a misnomer because it is not Brexit at all!

OUTSIDE the SINGLE MARKET the SNP WILL BE UNABLE to MAKE an ECONOMIC CASE for SEPARATION
The only reason the SNP wants the UK to maintain membership of the EU Single Market is because it believes it would be easier to win a second separation referendum.

There is no other reason!

Consider this: If the UK leaves the EU Single Market, then Scotland leaves too.

Scotland will trade with its biggest trading partner – the rest of the UK – within the terms of the UK Single Market.

This means that at any future referendum on independence, the SNP will have to make the case for Scotland to end up outside both the UK Single Market and the EU Single Market!

Even if an independent Scotland were somehow to join the EU (or the 'European Economic Area', the EEA, which gives access to the EU Single Market) and thereby join up again with the EU Single Market, it would then find itself outside the UK Single Market and in a different trading block from its biggest market – the rest of the UK – with whom it does 4 times as much business. 2

Being in, essentially, a foreign-trading block from its biggest customer would be very bad economically. And it would make it very difficult for Britain-wide businesses to coordinate.

It would most likely be unworkable altogether!

Therefore, when the UK leaves the EU Single Market, it will be very difficult for the SNP to make an economic case for Scottish independence. Indeed, it should be virtually impossible!

However, if the UK remains in the EU Single Market, it means that at any future referendum on independence, the SNP can simply say that Scotland will leave the UK, join the EU (or the EEA) and continue trading with the rest of the UK via the EU Single Market terms within which the UK would already be operating.

It makes it much easier for the SNP to promote the idea that "nothing will change".

It makes it much easier for the SNP to try to sell the idea of independence.

That's why the SNP supports the UK's membership of the Single Market.

It is because it makes it easier for them to argue for independence. It has nothing to do with what it thinks are the economic benefits to Scotland.

It is all about the benefits to the SNP's neverendum agenda. Everything the SNP does is for its neverendum agenda – not for the best interests of Scotland 'within the UK', a concept which it never even mentions.

Only a Full British Brexit can defeat the Scottish Nationalists.

Prof Michael Keating, professor of politics at Aberdeen University has stated to the Scottish Affairs Committee at Westminster:

"If it's a hard Brexit and the UK comes out of the European single market, then it makes it much more difficult for Scotland to become independent because you have that hard border with the UK market. Ironically enough, the closer the UK gets to the single market, the less grievance Scotland maybe has, but the easier it becomes for Scotland to be independent, because at that point you could have access to both markets." 3

If the British Government can have the fortitude to forbid a second independence referendum – and ensure a Full British Brexit – then it makes it much harder for the SNP to win one, post-Brexit.

The pseudonymous Blogger Effie Deans summed up the requirement for this Full British Brexit in order to defeat the SNP:

Brexit will bring the UK closer together and also it will bring us prosperity. The EU is in trouble. Its two main means for bringing the continent together are failing.

Free movement of people (Schengen) has led to new border posts going up. Everywhere in the EU people are building fences. The Euro is acting like a drag anchor on the EU economy.

We have a positive story to tell about the UK's future outside of the EU. Just watch as we succeed, while the EU gradually realises that it is a failed experiment.

A Hard Brexit makes the choice clear for Scots. The fanatics and the fundamentalists will want independence come what may, but they are a minority. The moment has passed just like so often before.

The last chance for Scottish nationalism is that the UK stays in the Single Market.

This is why Nicola Sturgeon is now making that her red line. The weakness of her position is shown by how her red lines keep changing. She threatens and blusters but never does anything. It is absolutely simple really. Our task is to defeat the SNP. But the first rule of battle is "always do what your opponent least wants".

If the UK remains in the single market, then the whole doctrine of how Brexit stops Scottish independence in the long term is liable to not work.

If the UK stays in the single market, it is as if we stayed in the EU. Then Scotland could vote to leave the UK with the comfort blanket intact and the SNP could argue that nothing fundamentally would change.

There would be no hard border, no damage to trade, none of the huge disadvantages that Brexit can bring to Scottish nationalism.

So Pro-UK Scots and Brits everywhere must face up to this choice.

The vote for Brexit required something like a miracle. It may later be seen as a second Dunkirk. Ordinary people rising up and doing what was necessary when our country was in danger. Brexit will equally save our country for the long term. It will keep it intact.

But for pity's sake don't throw the SNP a lifeline.

It really is time to change your assumptions.

Brexit only defeats Scottish nationalism if it is a Hard Brexit.

When you have a weed that keeps reappearing each year you have to dig it out at the roots and then pour weed killer in the hole. This is what a Hard Brexit will do to the hopes of Scottish Nationalists.

They will bluster and they will threaten, but their threats will be empty.

The price of staying in the EU Single Market is too high not least because in the end it will destroy our country. 4

EMPHASISE OUR BREXIT VISION
Different political parties have different ways of looking at the future, but as Unionists, we can speak generally.

For example, once Brexit gets underway a Vision for Britain must focus on these 4 points:

1. All four corners of Britain coming together to make this work.

2. Britain being free in new ways to invest, re-industrialise, and create jobs.

3. Britain remaining committed to the peace and prosperity of Europe through
a) serving in the NATO alliance, and
b) continuing to trade.

4. Britain re-establishing strong relationships with the Commonwealth and the rest of the world.

There is vast potential in new trade deals with the world, especially for Scotland. This needs to be constantly emphasised. We have the positives on our side.

The British economy is one of the largest in the world. It will prosper outside the EU where opportunities abound when we base a programme upon trade with 194 other countries world-wide, instead of only 27 in the EU.

Coming out of the Customs Union should do wonders for exports.

Scotch Whisky has a massive potential market in India, for example! Scottish Speciality Foods have huge potential in the British-Diaspora in the Commonwealth, as well as in the USA.

There is no doubt that we have a better Vision for Scotland, post-Brexit, than that offered by the Scottish Nationalists.

OUR UNIONIST POLITICIANS MUST NOT THROW AWAY THIS ADVANTAGE
So we will leave the final word to Effie Deans:

Brexit makes the case for Scottish independence much harder to make. It is vital that we use this opportunity to make this point ever clearer.

If the UK leaves the EU Single Market then whatever trade deal the UK has with the EU and with anyone else in the world for that matter will depend on Scotland being a part of the UK.

This means that if we have a deal with Australia or the United States, then Scotland would cease to benefit from this deal if we decided to leave the UK. The more Scotland depends on UK trade deals the better. This is the opportunity that Brexit gives us.

Lots of SNP supporters voted to leave the EU. If we can make a success of Brexit, then these people are more likely to support the continuance of the UK rather than Scottish independence which brings with it future EU membership.

By being continually negative about the prospects of the UK, unionist Remain supporters are liable to play into the hands of the SNP.

If the UK can come out of the negotiations with the EU in a way that is both advantageous for the UK and for the EU we will have a good argument to make against Scottish nationalism.

Future UK economic prosperity is our best argument against the SNP. Anyone who hopes that the UK gets a poor deal from the EU or that leaving the EU damages us economically should frankly join the SNP. 5

REFERENCES
1. According to Treasury figures: In 2016/17 the UK made an estimated gross contribution of £17bn (16.9) before the Rebate. If we include all the monies which come back to us, the Treasury estimates a UK average annual net contribution of £7.1bn between 2010 and 2014.
See researchbriefings.parliament.uk/ResearchBriefing/Summary/CBP-7886

FURTHER READING
How to Make Brexit a Great Success (4-12-17)
www.aforceforgood.org.uk/vision/brexit2

How to Defeat the SNP and Deliver Brexit (23-6-17)
www.aforceforgood.org.uk/vision/uk2

6 Reasons Why Brexit Would Not Lead to Another Scottish Referendum (14-3-16)
www.aforceforgood.org.uk/debunk/brexit1

If you appreciate the work we do, please donate to our Research and Street Activism via PayPal here:
tinyurl.com/ydxne3qx