The Talking Britain Downers: The How, Why and Who 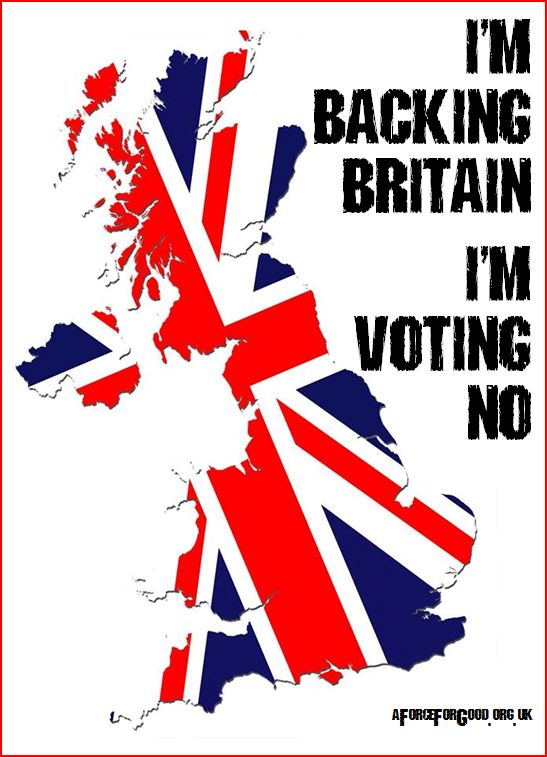 There is a group of journalists in the Scottish media who regularly talk Britain down because they have a separatist agenda to promote says Alistair McConnachie.
Posted 22 August 2013.

When we speak about the "Scottish media" we are speaking about the newspapers and programmes which are published and broadcast in Scotland and which deal overwhelmingly with Scottish matters.

Some of the journalists (but certainly not all of them) are separatists who are for the break-up of the UK.

These people swim around the very small goldfish bowl which is Scottish politics. Each day we can open the newspapers and see the same old trouts floating about.

They are a small, incestuous yet relatively effective group of communicators, who occasionally get published in some of the British national newspapers, purporting to speak as if for Scotland as a whole.

In this article, we name some of them, and explain why they are promoting their most recent anti-British "narrative" (story) – the notion that "Scotland and England are moving apart".

Firstly, let's look at a couple of well-worn anti-British narratives of the past.

Anti-British Narrative, Number 1. "Suez Marked the End of Britain"
Hitherto, the anti-British have tended to rely on the outdated anti-British narratives of the left from the 50s, 60s and 70s. One of those, still heard today, is the "Suez narrative". It really is quite a Yaawwnn...

It goes something to the effect that "Suez demonstrated that Britain is a declining power on the world stage".

It is meant to imply that our time in the sun is over and really we should just call it a day, break up Britain and go our separate ways.

However, this is now. Time moves on. The world turns. Everything is relative, and Britain today is one of the world's foremost national powers.

Anti-British Narrative, Number 2. "Everything Britain did was Bad"
This theme developed in line with the Suez theme. It was promoted by the anti-Empire brigade.

This anti-British mythology was quite powerful back in the 1970s and to an extent in the 80s, when the historical field was less developed, when contrary information was relatively inaccessible and when leftist academics were able to hoard their information in university libraries.

However, with the development of modern academic history, the entrance of large bookshops onto our streets in the mid-90s (thank you Waterstones!) and the wide-spread availability of information via the internet, that biased view is far less prominent these days and more easily disproven.

Nevertheless, variations on these two themes are still heard regularly from the more nutty or embittered separatists, even though these narratives are hugely out of date.

This brings us to...

A New Anti-British Narrative. Number 3. "Scotland and England are too Different to Live Together and Must Move Apart"
This is a regular theme heard now from the small incestuous stable of separatist scribblers.

They paint with a very broad brush and claim that Scotland is moving left while England is moving right. How do they justify such a remarkable claim?

Usually by emphasising that "Scotland" has a Conservative/Lib Dem coalition but only 1 Conservative MP. They tell us that "Scotland didn't get what it voted for". Yet they undemocratically ignore the fact that 878,326 people in Scotland (35.6% of the turnout) voted for the Conservatives and the Lib Dems.

They ignore this fact because the separatists seem to believe that only their votes should count. They also don't want to recognise that it was an election for all of Britain, not Scotland on its own.

The other point they use is that UKIP does not do as well in Scotland as it has done recently in England. However, there are reasons for that, which have nothing to do with the euro-scepticism of Scots, per se. 1

The Tory/UKIP Bogeymen: Scaring Scotland into Separatism
In this narrative, the Tories and UKIP play the role of the bogeymen. UKIP doing well in England, but not so well in Scotland, represents, for these journalists, the "proof" that England is somehow a different country, changing politically in a way that people in Scotland do not, and should not, approve.

"Be scared of England and its Tory/UKIP bogeymen" is the threat in their little story. "We need to separate in order to be safe" is meant to be our response. It is all nonsense, of course.

Why the Talking Britain Downers Talk Dismally about the UK
Journalists need to have something to whitter about. Imagine if the separatists lost the referendum in 2014 and these journalists had not seeded the ground with a new talking point which would keep their issue alive. They would be sitting on barren, infertile ground with nothing to say, and no money coming in.

So they have to hedge their bets and ensure they start talking now about things which promote their overall agenda, and which they know they can continue to talk about, even if they lose the referendum.

By establishing this dismal anti-UK narrative, at this stage of the game, it enables them to continue their separation theme even if they lose the referendum. Starting to develop stories now around this destructive theme gives them a way to keep their separatist pot boiling in the future.

Let's turn our attention now to who these people actually are.

We will add to this list as more information comes to us.

Naming the Talking Britain Downers
The Herald
Iain MacWhirter: With Ian Bell, one of the two most influential writers in the Herald and Sunday Herald stable. The Leader columns in the Sunday Herald always sound as if they are written by either MacWhirter or Bell. MacWhirter is largely responsible for promoting the Jimmy Reid Foundation's "common weal" document which purports to offer a "road map" (veering off towards the left!) for policies in an independent Scotland.

MacWhirter has admitted to complaining to his own children when there is news from England on the TV. This is the kind of mentality we're dealing with.

He wrote a good summary of his dismal, anti-British outlook for The Guardian this week entitled "Scotland and England are growing apart. A no vote won't stop that" (18 August 2013 on website). It should have been subtitled, "And I won't stop droning on about this either, so long as it pays me."

Ian Bell: Bell has written in the Sunday Herald that he would prefer "independence" even if it included "the nationalist impulse" turning "rancid, then vicious" ("Would I still want independence if every dismal possibility came true? Yes, I would", 15 January 2012.)

We had the following letter published in that paper, on 22-1-12, in response to his statement:

Ian Bell does not believe it is possible to be British in Scotland. He sees "nothing but an impossibility" in the fact that some "honest Scots" (how gracious of you Mr Bell) have a dual British and Scottish identity.

He says he would prefer independence, even if it included "the nationalist impulse" turning "rancid, then vicious" and even if "latent religious bigotry becomes its distinguishing feature".

None of this is surprising. He says he is a "republican socialist". It is in the nature of republican socialism to admit of no identity other than its own, and to prefer the principle over the practice, even if the reality brings chaos.

Fortunately, these republican attitudes, and their dire consequences, are largely contained fairly harmlessly in a Scotland within the UK, but separation from England would tend to incite them.

The Scotsman
Lesley Riddoch: Riddoch has suggested that UKIP does not have a right to be allowed to campaign or be heard in Scotland because it presently does not register as many votes in Scotland as it does in England. Listen to her try to promote this remarkably ignorant and undemocratic attitude in this video at 1.35 and enjoy watching her get put in her place by George Galloway. Hers is the sort of disturbing and illiberal mentality which people like her actually do believe, and would no doubt apply directly, if they but could!

Joan McAlpine: An SNP MSP, speechwriter for Alex Salmond, former Sunday Times Scotland editor, and a former Scotsman columnist. Presently, she has a political column in the Daily Record. She was married to Pat Kane, who is also a prominent separatist commentator.

Gerry Hassan: One of the most prominent of the Talking Britain Down team, who has a weekly column in the Scotsman in which he regurgitates exactly the same article, and exactly the same point, every Saturday...except each time he puts the words in a different order.

This week he was talking about the "foundation myths" of Britain not being up to scratch and that we need to reimagine the UK as a vacuous bletheration...sorry, as something "progressive, liberal and European" and if that was not possible...then...clearly...more articles on this theme will be necessary - "Cheque payable please to Gerry...that's Gerry with a 'G'". ("Foundation myths can't hold Britain together", 17-8-13)

Others
Henry McLeish: The former Labour First Minister for Scotland, who claims to be a "unionist" but who gives every impression of being a separatist, had an article in the Scotsman (20-8-13) entitled "Engulfed by a perfect storm?" (whatever that was meant to mean?). His point: There is "a growing divide" between Scotland and England because of "toxic" Tory policies and "UKIP".

It was, to quote one letter writer the next day, a "turgid" and "overlong piece of political theatre" which was "vaporous" and "left wing alarmist", offering little "clue to precise principle and advice".

There are others, and you can read them virtually any day of the week in the Scottish press, all of whom are coming from a left-wing, and often far-left point of view. However, the above are the most established Talking Britain Downers.

We welcome suggestions of others to add to this list, as well as information regarding connections between them, intimate and otherwise.

(1) For example, the Scottish political scene is already over-crowded with 4 main parties compared to 3 in England; 'independence' is usually associated with the Westminster, not Brussels, question; and consequently the matter of the EU is simply a debate which has never properly occurred. On top of this, UKIP in Scotland is an amateur outfit without even one paid employee. It is not professionalised in the manner it is in England.

Having said that, at the by-election in Aberdeen Donside on 20 July 2013, the UKIP candidate came fifth, after the Tories with 1,128 votes, almost saving his deposit, missing out by a mere 42 votes or 0.07%! This occurred even though it was handicapped by not being invited onto any Hustings platforms, which alone may have cost it those 42 votes. Furthermore, a lot of its natural supporters were reporting that they were voting Labour to try to keep the SNP out.