Believe in Britain and Vote Standing on that Rock of Principle 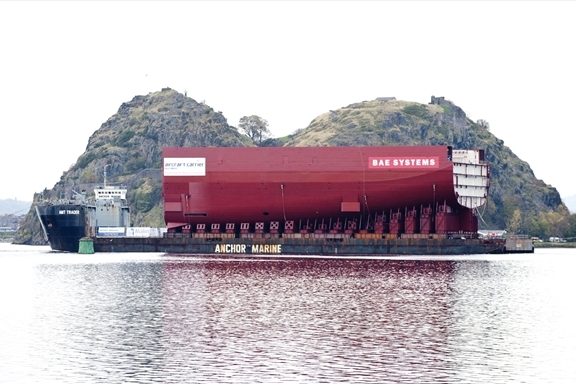 Posted 25 March 2013. Photo: A lower section of HMS Queen Elizabeth passes Dumbarton Rock; The Rock of 'The Fortress of the Britons'.

Some people in Scotland are going into this referendum with the wrong approach.

There is a big difference between principles and policies. This referendum is about the principle of the United Kingdom, and maintaining the UK into the future as a valuable and relatively harmonious political structure for the benefit of all its people and for the world.

It is a vote, on principle, for the United Kingdom; for all it is, and for all it can be.

This referendum is not about policies we don't like.

Politicians from both sides, who concentrate on temporary policies - rather than the permanent principle of the United Kingdom - are only confusing and misleading people.

This was brought home to us when we read a comment in a Sunday paper from someone saying she was going to vote for "independence" because she didn't like the recent welfare benefit changes! (Eddie Barnes, "The Missing Million", Scotland on Sunday, 24-3-13, p.13)

A "policy" is something that the government of the day does. For example, the smoking ban is a policy. The "bedroom tax" is a policy. Policies are derived from the fundamental philosophy of whichever political party is in power.

It is because the Conservatives, Lib Dems and Labour can put aside their policy differences and unite on their fundamental philosophical belief in the maintenance of the UK, that they are able to co-operate in the pro-UK campaign.

Policies are Constantly Changing
Policies come and go. They change with the wind. Have patience, wait a little while and another one will come along, usually with the next government.

A person who says he or she is going to vote for separation because they don't like the welfare benefit changes either doesn't grasp, or is too impatient to accept, that policies change regularly.

Perhaps our voter may like the new policy in a few years time, but it is certain there will be plenty of others who do not.

On that day, we will not be electing a new government for the next 5 years.

We will not, and should not, be voting on whether we like or dislike "the bedroom tax" - that is a temporary policy which will only last until another government overturns it.

We will not, and should not, be voting on whether or not we like the present Coalition government and its policies - who, in any case, may or may not be re-elected at the next General Election.

Rather on that day, we will be voting on whether or not to break up the UK.

We will be voting to either maintain the United Kingdom, or to destroy it.

That is what is at stake. That is how important and momentous this decision is.

Our vote should have nothing to do with a here-today, gone-tomorrow policy, or government, which is going to change in the future anyway. It is about the philosophy of the matter. It is about our principles!

It is about what we fundamentally believe in life.

Believe in Britain
We are voting positively to show our love of Britain, the nation. It is a vote to re-affirm our support for the Union and to re-dedicate ourselves to the United Kingdom. It is a vote which says we have faith in its vast, yet unrealised potential.

If all you care about is some temporary here-today, gone-tomorrow policy which is going to change in the future anyway, then it has to be said that you are not bringing the sufficient seriousness of mind, and mental application to bear, which this massive decision demands.

Don't vote standing on the temporary sands, forever shifting, of policies you happen to like or dislike.

Believe in Britain, and vote standing on that permanent rock of principle.