Scotland would Still Say No: 4 Ways the General Election was Different from the Referendum 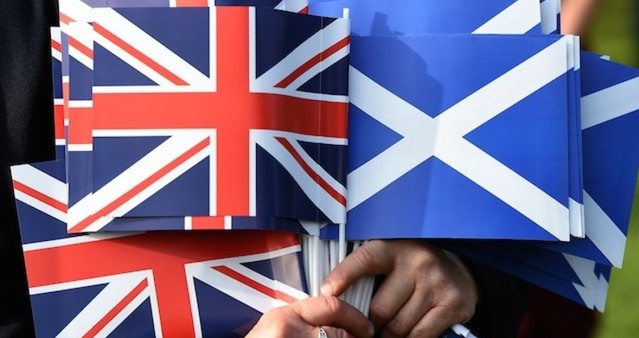 This article examines the General Election vote in Scotland on 7 May 2015 and compares it with the victory of the No side at the referendum in 2014, and the results for the unionist parties in 2010. It considers 4 reasons why the SNP was successful at this election.

This article by Alistair McConnachie was posted on this site on 9 May 2015.

Prior to the General Election we held the view that there would be no 'really good' result for unionists 1 – regardless of how many SNP MPs were elected – although there would be 'reasonable' results, depending upon how the chips fell.

This is because the Tory, Labour and Lib Dem parties were, and still are, committed to various forms of increased and unnecessary devolution which will give to an already powerful nationalist-dominated Parliament at Holyrood even more power for it to use against the unity of the United Kingdom.

We hold to the correct view that constitutionally, democratically, legally and morally, the British Parliament has an absolute duty to carefully examine the draft Bill which arose from the Smith Commission and use its lawful authority, granted to it by all of the people of the United Kingdom at the General Election, to carefully debate, and change where necessary, the most damaging anti-UK aspects of the Smith Commission's recommendations.

Anything less would be to concede the dismal view that laws in the UK can now be made by undemocratic Ministerial Dictate, (as per the Party Leaders' so-called 'Vow' prior to the 2014 Referendum) and as a consequence of 'recommendations' made by a mere advisory body (the Smith Commission).

Rumours that a new British government may even give this nationalist-dominated Holyrood 'full fiscal autonomy' – a proposal which was not even in the Conservative Party Manifesto – is also disturbing.

In a future article we will highlight those areas of particular concern in the hope that our MPs – all of them – will be able to, at least, mitigate some of the obvious long-term dangers to the Union, and to the ability of the British Parliament to govern its own people.

However, in this article, we are going to examine some statistics from the General Election and consider why the SNP did so well.

Firstly, let us look at the Referendum result back on 18 September 2014.

A straight choice revealed that 38% of people voted to leave. There had always been around 1 in 5, some might argue 1 in 4, of the Scottish electorate of that opinion. The referendum campaign added 13-18% on top of them.

While, 47% of the entire electorate in Scotland voted to stay, the General Election was always going to be different, in 4 ways:

Difference 1: A lot of people who voted at the Referendum would not bother to vote this time around. It would be likely, however, that those people who were 'inspired' by the idea of separation would vote.
Difference 2: The unionist 47% would be split 4 ways (Lab, Con, Lib Dem and UKIP). Meanwhile, the 38% Yes would – having made the jump to the hitherto unthinkable idea of 'independence' – naturally vote for the party which advocates it. That is what inevitably happens when we spend 3 and a half years normalising the hitherto absurd idea of a UK break up!
Difference 3: Many people who voted No and who were inspired to keep the UK together would not necessarily find the idea of voting for any of the unionist parties particularly attractive.
Difference 4: Some people would vote SNP simply 'for Scotland', even if they did not actually want separation.

All of these things have happened.

Let us examine Differences 1 and 2 together; the numbers who did not bother to vote, their impact upon the success of the SNP, and how those who voted were split.

[OTHERS: 7,107 -- 0.17%: This figure largely includes a party which advocated the legalisation of cannabis, and several people who stood as independents. We don't know where any of their voters might have stood (or slept) on the question of the Union, so we have removed them from this calculation.]

That means that a lot of people deserted both the Lib Dems and Labour. We are presuming that the overwhelming bulk of this 574,177 figure went to the SNP, and a small amount to the Greens (whose vote rose by 22,378).

Yet, the SNP vote rose by a huge 963,050. Therefore, the SNP took a lot of votes from somewhere else – which was not from any other party that lost votes. This must have come largely from those people who did not vote in the General Election in 2010, but who voted this time around – a figure of around 445,000. Perhaps these were people who were either voting for the first time, or who had voted for the first time in 2014. 3

We accept, of course, that some of those would not be able to come out this time since they included 16 and 17 year olds and EU citizens who could not vote.

Again, of course, we accept that some of those would not be able to come out this time since they included 16 and 17 year olds and EU citizens who could not vote.

However, the figures seem clear that the Unionists did not manage to mobilise their support in the manner of the Separatists.

As per our Difference 3 above, there would also be people who voted No at the Referendum, but who were simply not interested in bothering to vote for any of the unionist parties this time around – either because 'politics' does not interest them, or because they remained uninspired by the choice on offer. These people would still vote for the Union in a referendum, though!

As far as Difference 4 is concerned – people who vote SNP but don't want independence – we really don't know how widespread this behaviour is; although we always hear reports about it.

Presumably, such people want to eat their Scottish cake and still have their British one. Unfortunately, they do not consider the long-term consequences of such behaviour.

Voting for the SNP simply because you think it will 'look out for Scotland' would be relatively harmless behaviour…if the SNP was a Unionist party!

However, the SNP wants to break up the UK!

If you vote for it, then you are helping it to promote its Separation Agenda, politically, legally, economically, socially, culturally, historically, and in every way – to the point where one day you might wake up and realise that it has changed the political reality which surrounds you, and consequently, the entire nature of your existence…and not in a good way!

In our next article, we will look at some of the frequently heard questions regarding the SNP at Westminster, and we will consider how best to deal with it from a pro-UK perspective.

REFERENCES
1. We define 'unionist' as someone who believes in, and wants to maintain, the Union of the United Kingdom of Great Britain and Northern Ireland.