These are Some Things,
Some Things that Britishness is Made Of 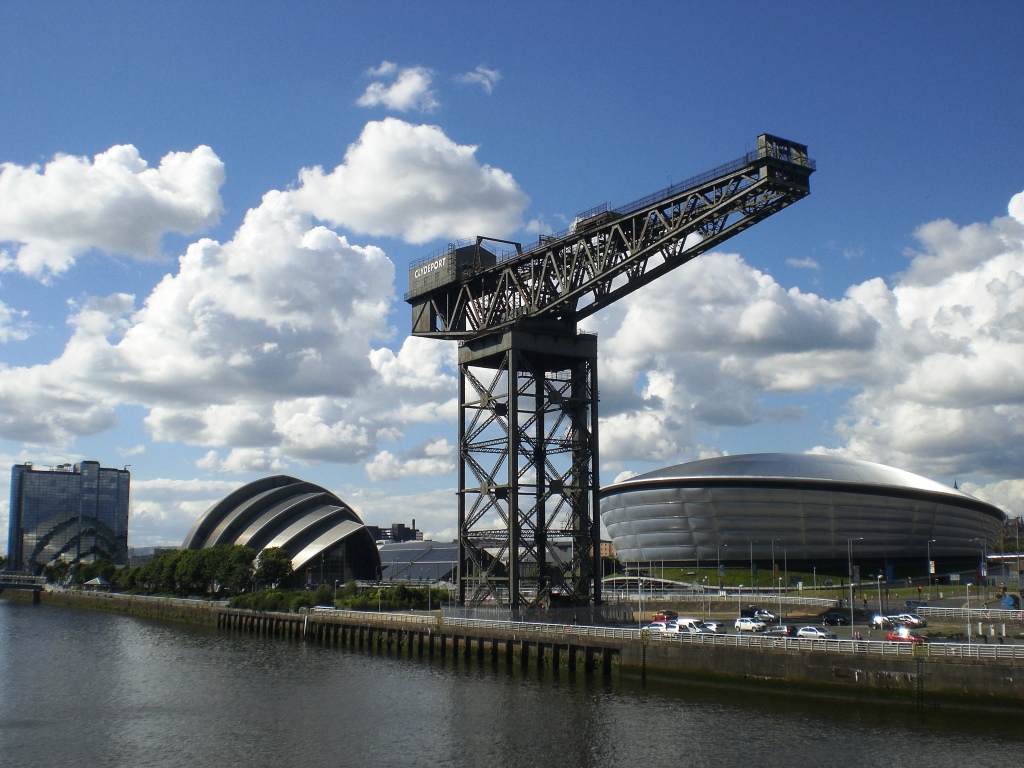 The 2011 census raised the questionable statistic that 62% of Scots claim to be "Scottish only". But for such Scots, our Britishness is like our internal organs. Not thought about, taken for granted, and perhaps even abused, but absolutely necessary for our lives, and we can become more conscious of this obvious fact, says Alistair McConnachie.

Photograph: On the banks of the Clyde; The Crowne Plaza Hotel, the Armadillo, the SECC, the Finnieston Crane, the Hydro (6-7-14). Photograph copyright of Alistair McConnachie.

A recent statistic emerged from the 2011 census that 62% of Scottish people say they are "Scottish only". This contradicts other polls which put that percentage much lower. It has been suggested that the question was asked, and the answers presented, in an unscientific manner which biased the result. Furthermore, if this was accurate then the separatists should be massively in the lead.

Be those questionable things as they may, let us proceed by imagining that this figure is correct.

WHY DO PEOPLE SAY THIS?
For some, it may be a way of trying to make a distinction between themselves and "the English". Being outnumbered 10 to 1 by "the English" has always made some Scots feel a need to impress their Scottishness upon the situation at hand, and no doubt it always will.

There is nothing wrong with that, per se. It only starts going wrong when there is a reluctance to throw Scottishness into the Big British Mixing Pot with everyone else, preferring instead to go it alone. That is when Scottishness starts to become divisive and dangerous not only for Britain, but between Scots themselves.

For others, albeit fewer in number, there is a political opposition to Britishness and for some the mistaken, and often deliberately willful, claim that it is only Englishness writ large. 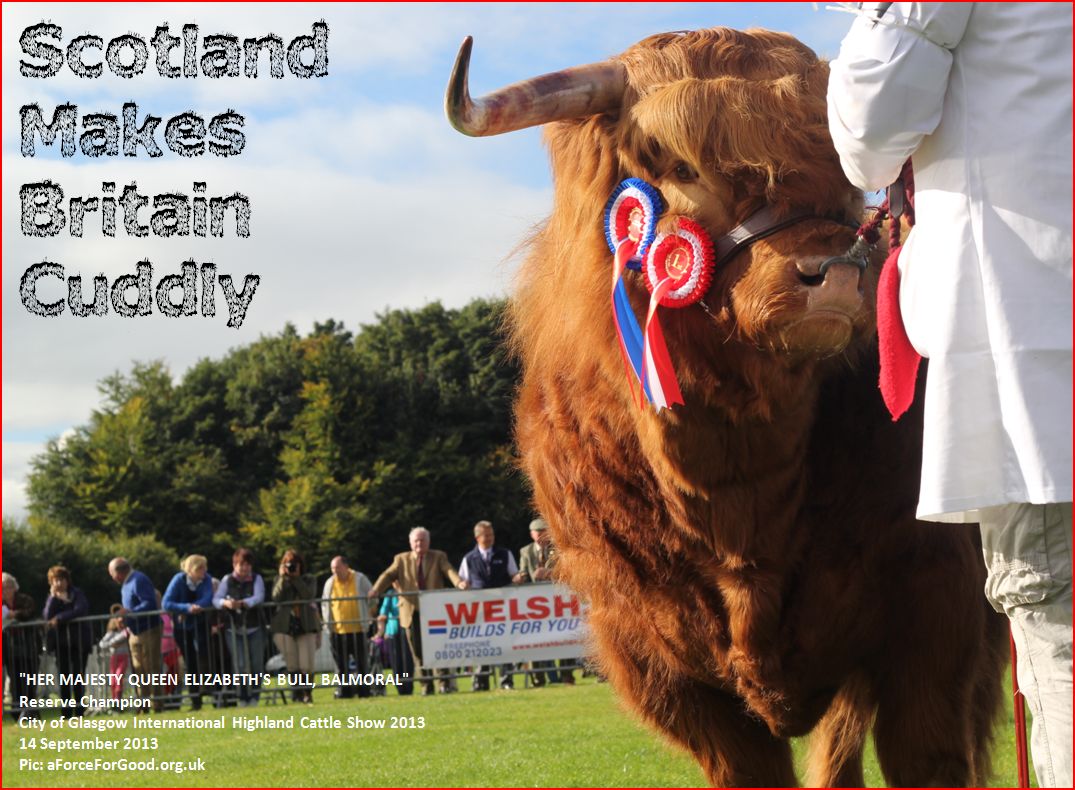 SOME SCOTS ARE UNCONSCIOUSLY BRITISH
Yet, for many of these people, the lives they lead and the actions they take reveal the fact that they are not just "Scottish only".

They have a functioning Britishness which is vital to their existence, even if for them it is an unconscious thing, or has been forgotten, or is consciously rejected.

For some Scots, our Britishness is like our internal organs. Not thought about, taken for granted, and perhaps even abused, but absolutely necessary for our lives.

Even if it is a practical thing, without any conscious sense of emotional attachment, it is still a form of Britishness which is part of their identity and which contradicts their claim that they are "Scottish only".

For example, how many who say we are "Scottish only" are in fact depending upon and/or benefiting from Britain in the following ways:

Our Work
- We can travel freely, look for work, and find work anywhere in the UK, with minimum fuss.
- We work, or have worked, elsewhere in the UK.
- We work for a British company which employs people the length and breadth of the UK, and which depends upon the entire British market to survive.
- We work for a Scottish-based company whose main market is the rest of the UK.
- We work, or have worked for a nationalised British industry or service.
- We have served in a British institution, such as the Armed Forces.

Our Finances
- We benefit from the shared British tax system which redistributes money from Penzance to Pittenweem, from Aberystwyth to Aberdeen every day.
- We enjoy British-based pension systems. Our Old Age State Pension money comes from savings from people throughout the UK. If we have a Personal Pension, it is likely to be based on the British economy, not the Scottish one.
- We benefit from the NHS – which has been a British national, and British-funded, creation from the beginning. (The nationalists try to pretend that the NHS in Scotland has "always been devolved" because its administrative structure in Scotland has always been different – with "Health Boards" in Scotland. However, this does not change the fact that it was a British national creation, and remains funded by the British taxpayer.)
- We depend upon the strength of the British economy to create jobs.

Our Security
- We enjoy the protection of the British State. Everyone in Scotland depends upon the British Armed Forces, British Special Forces and British Security Services to keep us safe every day of our lives. This extends to everything around us; the safety of the cities we walk in, the computer systems we use at work, the oil and gas we use, the electricity system, the roads we travel, the purity of the water we drink, the air we breathe, and the food we eat – all corruptible by malign forces, but defended by our Security Services which are British not "Scottish only".
- We depend upon our British citizenship to enable us to "pass freely without let or hindrance" throughout the world, as it says on our British Passport. Behind that demand and that citizenship, is the power of Britain in the world, upon which we are utterly dependent. It is our British citizenship which will ensure that the British State will help us wherever in the world we may be, through its extensive network of embassies and allies and national goodwill built up over centuries.
- And if it really hits the fan for us, then we rely on our British citizenship to enable us to be rescued by our British Special Forces.

Our Leisure
- We love holidaying in London, Liverpool, Manchester, Devon, Cornwall, and the rest of the UK.
- Our favourite rock band or pop star is from England, and our favourite TV programmes are about people in England.
- We go to see concerts elsewhere in the UK.
- We follow and support English football teams, and some of us even go down to watch them play.
- We follow fashion brands and fashion concepts from the rest of the UK.
- We read and enjoy magazines and newspapers published elsewhere in the UK.
- We enjoy sitting and relaxing in municipal parks in all the big towns and cities in Scotland – many of which were founded in the Victorian era, as a consequence, or in commemoration of, the greatness of Britain, British people, and the British Empire.
- We enjoy visiting monuments and museums, again, created or founded as a consequence of Britain and the British and our role in the world.

Even Scots who would want to deny all of these things will find some aspects of their life which are undeniably "British", whether they like it or not.

We are surrounded by the benefits of Britishness. We all benefit. It is a very useful identity.

To say we are "Scottish only", does not reflect the reality of our lives.

Perhaps the reality is that, for many, we have never thought about these things in this way.

We are not conscious of these things because we have never heard them articulated in this way. We have neglected to recognise this element of our living, breathing, everyday reality and identity.

WITH SEPARATION THESE THINGS WILL GROW DISTANT
It could be argued that many of these things, especially regarding entertainment "will not change", but they will. With separation, over time they will grow distant.

WHAT IS TO BE DONE
Andrew Marr has written: "Britain is to the extent that we choose it, by act of will. And is not, similarly, by other choices – a lack of conscious remembering and multiple assertion." [Andrew Marr, The Day Britain Died, (London: Profile Books Ltd, 2000), p.viii.]

He means that: Britain is a nation to the extent that we make it a nation by our acts of consciously remembering it as a nation, and asserting, on a regular basis, related positive matters about it as a nation.

A nation, any nation, whether "Scotland" or "Britain" can only exist as a real thing through an effort of consciously remembering things about it, and asserting positive things about it, on a regular basis. Otherwise, the nation, and its related identity, simply gets forgotten about, slowly dies and eventually disappears.

That is as true of Britain and Britishness as it is of Scotland and Scottishness.

The nationalists understand this very well. They are highly motivated to constantly push in "Scottish" things, while simultaneously doing what they can to push out, "British" things.

Unionist-minded people are very poor at understanding this element of politics. Look at the Unionist-controlled councils in Scotland which omit to fly the Union Jack, for example. If you don't fly the Union Jack then you are pushing out a vital symbol of the Union, and an omnipresent sense of Britishness, from the public realm. Such an omission on a regular basis, and a widespread scale, has had massive political consequences, the unfortunate bad fruits of which we are living through right now.

Too many unionists think Britain, the nation and its identity, will somehow always exist without any effort on our part. They are wrong.

If Britain and its identity is to live, it needs constant remembering and talking about in a positive way.