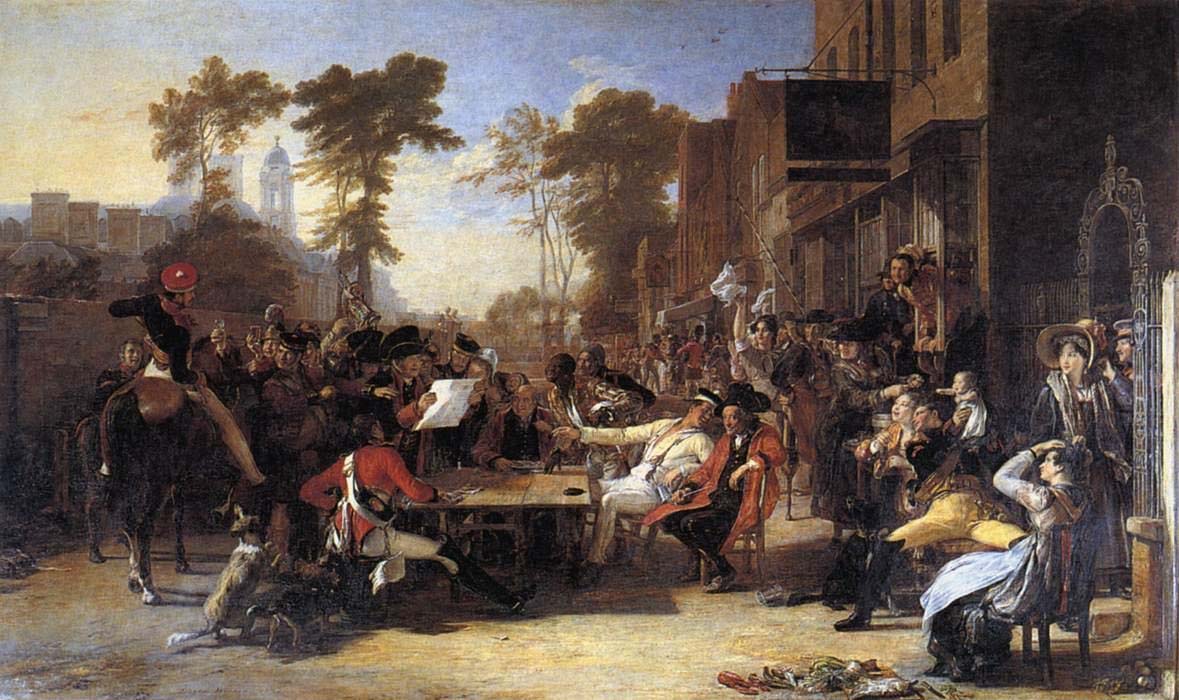 Sir David Wilkie (18 November 1785 – 1 June 1841) was a Scottish-born artist who painted the famous 1822 'Chelsea Pensioners Reading the Gazette of the Battle of Waterloo'. Sir David has a memorial inside Cults Kirk in Fife. The painting caused a sensation with its attractive synthesis of Britishness, and there is still much that we can learn from it notes Alistair McConnachie.

When the Scottish-born painter, Sir David Wilkie exhibited his painting Chelsea Pensioners Reading the Gazette of the Battle of Waterloo, at the Royal Academy in 1822, it caused a sensation. Thousands of people queued for hours to see it from morning to night.

The historian, Linda Colley describes the painting for us in her book, Britons: Forging the Nation 1707-1837:

The date, the artist tells us, is Thursday, 22 June 1815, and the first official confirmation has just been released of the British Allied victory at Waterloo. The scene is a long-since demolished street in Chelsea called Jew's Row, lined with old, low-storeyed taverns, cheap lodging houses, pawn-brokers and rag shops, but close, none the less to Chelsea Hospital, a home for invalid and retired soldiers since the late seventeenth century.

And it is a miscellaneous crowd of soldiers, veterans, womenfolk and shabbily dressed workers that is shown reacting to the news. A Scottish Highlander plunges into a celebratory tune on the bagpipes, and women are being drawn into a dance. A sergeant tosses his baby into the air, the child fizzing with excitement at the colour and the noise.

His companion pauses in arranging her hair, her arms raised motionless above her head as she listens pensively to the account of the battle. Just as entranced is an elderly oyster-seller who has stopped in the very act of slitting open an oyster and is grinning toothlessly as her imagination catches fire. Girls wave handkerchiefs, men strain out of windows to catch the news.

Explicit in this strictly imaginary scene is the existence of a mass British patriotism transcending the boundaries of class, ethnicity, occupation, sex and age.

But the key to the painting which Wilkie published at the time shows that he wanted to convey something more than this. Chelsea Pensioners Reading the Gazette of the Battle of Waterloo is, in fact, one man's very perceptive interpretation of both the variety and the roots of Britishness.

The horseman shown bringing the news of the victory is from a Welsh regiment; the soldiers gathering around him include Scotsmen, Englishmen, an Irishman and even a black military bandsman. The Chelsea pensioner reading aloud from the closely printed pages of the Gazette is a veteran of the battle for Quebec in 1759.

And hanging above the row of taverns are inn signs bearing witness to yet more battles, yet more wars. There is "The Duke of York", in memory of Britain's war with Revolutionary France. There is "The Snow Shoes", a relic from the War of American Independence. And there is even a sign commemorating the Marquess of Granby, hero of the Battle of Culloden in 1746 and of the Seven Years War.