The Britishness of Robert Burns 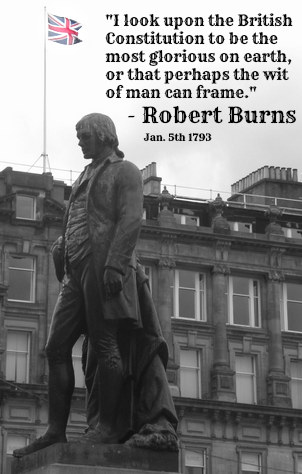 Robert Burns was both a Scottish and British patriot and when his loyalties were questioned, he was keen to emphasise that fact, points out Alistair McConnachie. Posted 30 January 2013, and updated 24 January 2014.

Some people wonder if Robert Burns (1759-1796) were alive today, whether he would be for, or against, the Union?

In this article, we do not mean to suggest that Burns was either pro-Union or anti-Union. Possibly he was neither. Perhaps he had a bit of both in him. He was after all, a poet, not a politician.

Rather, the point of this article is to highlight a few of Burns's stated positions which indicate clearly that he was a supporter of the revolutionary settlement of 1688, and a supporter of the British Constitution and monarchy generally.

At a point in his life, Burns found himself suspected of perhaps being a bit of a radical, perhaps even a supporter of the French Revolution (of 1789). At this time, he was working for the British Excise. He was keen to make it clear that he was not such a supporter, and he stated this very clearly for the record, as the following examples show.

Burns, a Presbyterian, was not a supporter of the Stuarts, although he did seek to try to treat them as fairly as possible, and sought to place them within the context of their time. He wrote of the Jacobite Risings of 1715 and 1745 in a letter to the London paper, The Star (although some have said it was to the Edinburgh Evening Courant) of 8 November 1788: "That they failed, I bless God, but cannot join in the ridicule against them." 1

Referring to the "revolution" of 1688, on 31 December 1792, Burns wrote to Robert Graham, of Fintry, saying, "To the British Constitution, on revolution principles, next after my God, I am most devoutly attached." 2

In another letter to Robert Graham, shortly thereafter, dated 5 January 1793 he wrote:

"I never uttered any invectives against the king. His private worth it is altogether impossible that such a man as I can appreciate; but in his public capacity I always revered, and always will with the soundest loyalty revere the monarch of Great Britain as - to speak in masonic - the sacred keystone of our royal arch constitution. As to Reform principles, I look upon the British Constitution, as settled at the Revolution, to be the most glorious on earth, or that perhaps the wit of man can frame; at the same time, I think, not alone, that we have a good deal deviated from the original principles of that Constitution,- particularly, that an alarming system of corruption has pervaded the connection between the Executive and the House of Commons. This is the whole truth of my Reform opinions, which, before I knew the complexion of these innovating times, I too unguardedly as I now see sported with: henceforth I seal up my lips." 3

In a letter to John Francis Erskine, Esq. of Mar, written from Dumfries on 13th April, 1793, he said:

"In my defence to their accusations, I said, that whatever might be my sentiments of republics, ancient or modern, as to Britain, I abjured the idea:- That a constitution, which, in its original principles, experience had proved to be every way fitted for our happiness in society, it would be insanity to sacrifice to an untried visionary theory:" 4

In the same letter, he speaks of himself in the third person as having an "independent British mind" and of his children as "the little independent Britons, in whose veins runs my own blood". 5 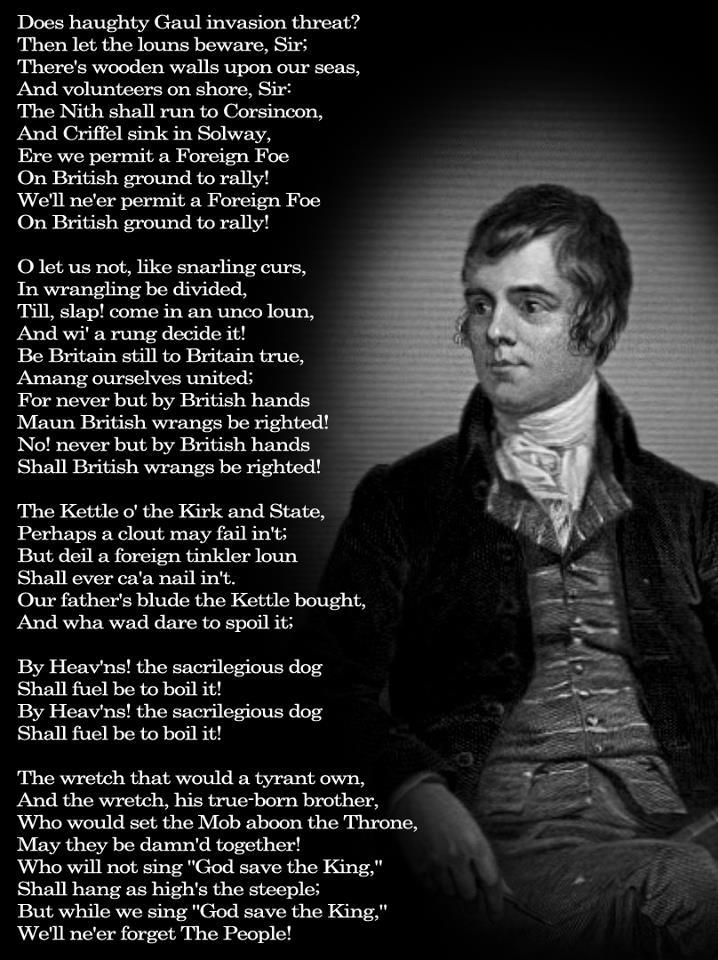 Let us Not Like Snarling Curs, in Wrangling be Divided
The Scottish nationalist writer and historian Paul H Scott - who appears to consider himself blessed with some kind of uncanny ability to know what Burns was really thinking on all matters - excuses this material as simply "prudent insincerities" 6 by a man who was worried about keeping his job with the Excise.

But are we really to believe this insincerity extended to joining the Royal Dumfries Volunteers two years later on 31 January 1795, and even writing their anthem?

The poem "The Dumfries Volunteers", also known as "Does Haughty Gaul Invasion Threat?" is a stirring piece of British patriotism, which also has a little bit of Burns's "a man's a man for a' that" attitude added in at the end - demonstrating, to those who might think otherwise, that there is no inconsistency with being both for the Monarchy and for the People, at one and the same time.

It was written in April 1795. The poet sent it to a Mr Jackson, editor of the Dumfries Journal by whom it was first published. It also appears in the sixth volume of "Museum" published nearly seven years after the poet's death. The song was also printed with music.

It includes a verse which pretty much says it all:

Be Britain still to Britain true,
Among ourselves united;
For never but by British hands
Must British wrongs be righted!

"Be Britons still" would make more sense, particularly when followed by the line "among ourselves united".

We would need to check the original publication in the Dumfries Journal, but even if it says "Britain" instead of "Britons", that could still have been an original typographical error!

When Robert Burns was buried on Monday, 25 July 1796, he was buried with full military honours. His corpse was clothed in the uniform of the Royal Dumfries Volunteers. 7

The evidence shows that Burns was both a Scottish, and British, patriot.

Postscript (8-1-16): Since this article was written, we have been told by a colleague who researches historical matters that in the past, the word "Britain" (sometimes spelled "Brittain") was occasionally used to mean what we now call "Briton". So in that usage, "Be Britain still" could also have meant "Be Briton still".