The Meaning of the State Opening of Parliament 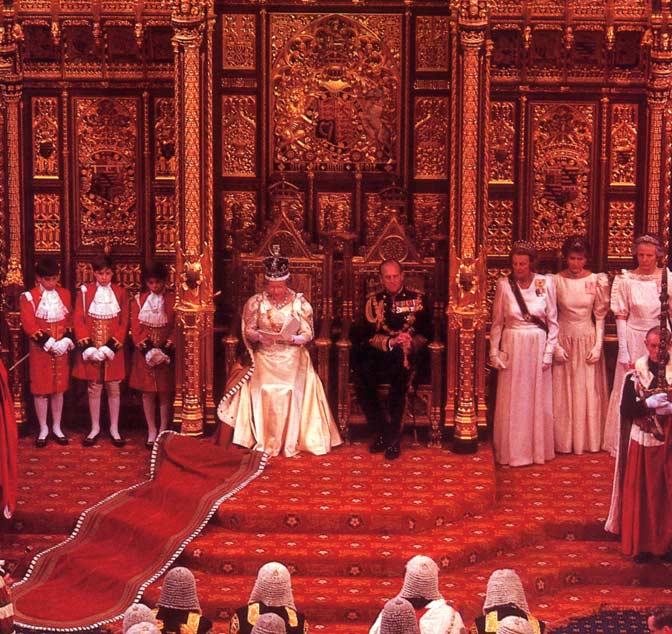 This article by John Papworth appeared originally in the July 2005 issue of localist newsletter Purton Today and was republished with permission in the September 2005 issue of Sovereignty. It was published on this site on 14 May 2012.

The Queen's Speech is the grand Parliamentary occasion of the year, the one where our crowned and anointed Monarch outlines the intentions of Her government which we have elected to do our bidding.

But theory in these matters is nowadays turned upside down and inside out in order to advance a long running plot to destroy the power, the significance and the meaning of our Parliamentary rituals.

The Queen's Speech is an event of grand pageantry and ceremonial, one of elaborate pomp and circumstance designed to register and to emphasise the sovereignty, the dignity and the majesty of our nationhood, to remind us, the British people, of the glories of our history and the supreme triumph of our achievements in establishing the sublime dignity of democratic government in the Mother of Parliaments and all that pertains to our sense of justice, freedom and the rule of law over the forces of arbitrary powermongering and dictatorial chicanery.

But our real rulers today have other ideas about our destinies.

Our television bosses, instead of highlighting the occasion, so that the cameras enabled us to see and enjoy every moment of the great spectacle of our monarch's ceremonial exercise of her unique function, where the exercise of royal power and prerogative is welded to the imperatives of democratic order, they permitted us to catch only brief glimpses of the powerful symbolism of the occasion.

All the vast uplifting spectacle of monarchical ceremonial pageantry that might remind us of who we are and where we are as a people and as a nation, all staged with such elaborate sense of national dignity and occasion, was reduced to brief, tantalising glimpses of royalty in full regalia in procession to the throne from which the great speech was to be delivered.

It might have been the report of some event of some insignificant territory on the borders of Venezuela; then we were fobbed off with chatter, chatter, chatter of know-all-windbag commentators distracting us from what matters with mountains of words.

And of course it is all deliberate, all done to play down our sense of our own history and our national identity in order to ram this EUropean boardroom plot down our throats.

Harold Wilson described the Treaty of Rome as "The Magna Carta of the Western European Multi-nationals", which of course is all it has ever been, global economic forces, boardroom boys ruthlessly seeking more elbow room to make more money by sweeping away our national frontiers and any national powers or institutions which obstruct them.

So their media servants damp down the majesty of a royal occasion, just as the other servants from the same stable lose no chance to denigrate and belittle the members of our royal family and all that it signifies.

So our local Royal Wiltshire Regiment here is going to lose its title in order to became a unit in an EUropean army even now being formed and plotted for to fight bigger wars despite promises of peace and progress from Brussels to those of us who are as gullible as goldfish.

On Armistice Day they recite some words about the sacrifices of two world wars and solemnly intone "We will remember them".

The dead today are not being remembered they are being betrayed.

Footnote, added 14 May 2012:
An edited version of the following letter by Alistair McConnachie was published in The Herald on Monday 14 May 2012. The value of our heritage has to be constantly explained because every generation has its Philistines who would prefer we raze down everything of the past, and start again at Year Zero, based upon their materialistic view of the world.


Help us Raise Money via Amazon: Here is a way you can help us cover our running costs. We get a commission on products which are purchased on Amazon after the customer has arrived at Amazon via clicking on an item in one of our Amazon widgets (as below). This includes products which are not listed on the widget but which you find after arriving on Amazon via this portal. For example, if you click on an item below, get taken to Amazon and then move around to purchase an item, of any value, then we will receive a percentage of your purchase. Depending upon the product - for example, watches and jewellery - it can be up to 10%. Books are 5%. The product costs exactly the same to you whether it is accessed via our site or directly, and nor do you have to purchase the item we have recommended. Therefore, any time you want to purchase from Amazon, please get in the habit of reaching it through any of our widgets. This can really help us. Thank you!
[Legal Statement: Alistair McConnachie is a participant in the Amazon EU Associates Programme, an affiliate advertising programme designed to provide a means for sites to earn advertising fees by advertising and linking to Amazon.co.uk ]