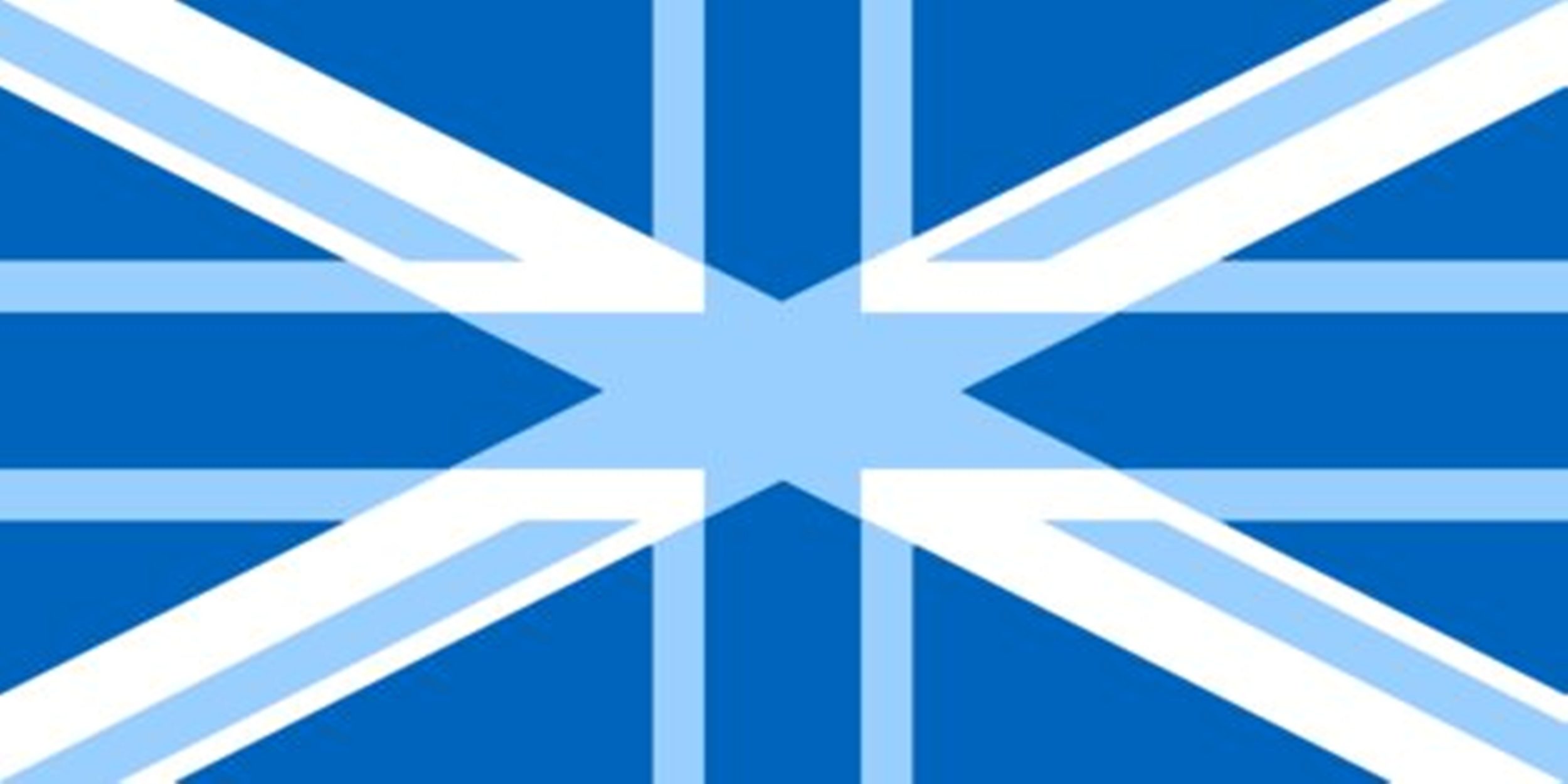 The choice to have a dual identity which is both Scottish and British is another positive benefit of the UK; and it offers the best of both worlds. However, a separate Scotland would, inevitably, make it harder to be British, and would ultimately remove the choice, says Alistair McConnachie. Posted 9 November 2012.

The referendum to reaffirm our support for the UK will be won by a diversity of people voting Yes to the UK, and No to a separate Scotland.

This diversity is going to include people who consider themselves British only, or more British than Scottish, or equally British and Scottish, or more Scottish than British, and even by Scots who don't consider that they have any "British" identity at all [and actually even by people who are neither, but are resident EU citizens].

All of us will see reasons why it is good and necessary to stay with the UK, even if for some of those without a sense of British identity, those reasons are economic, social or political.

Rather, here we point out that the United Kingdom offers us the choice to be Scottish and British. It offers us the benefit of a dual identity. A Scotland separated from the UK, would, however, inevitably over time act to remove that choice.

Therefore, the debate about Scotland's future is not only a technical one about the economic ability of Scotland to go it on its own, but it is also about the continued existence of our very own personal identities and allegiances. This debate cuts deep! 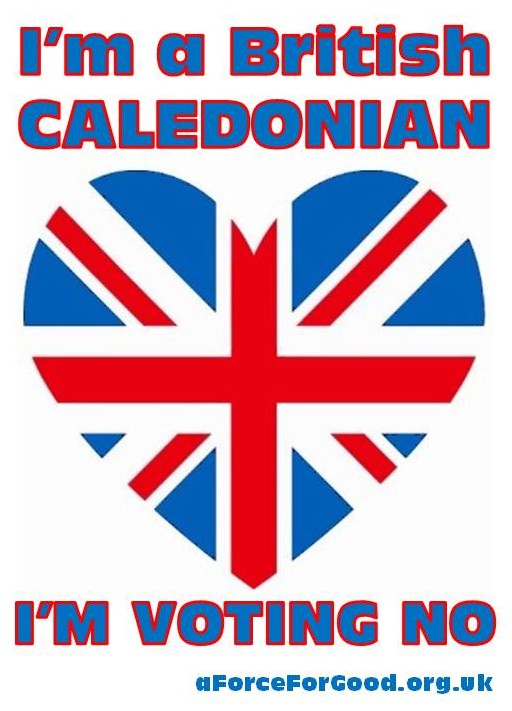 "Scottish not British" is also an Argument for the Union
Recently we heard a nationalist audience member on a TV programme say that he considered himself to be "Scottish not British". Well, we were sorry to hear that he didn't understand the benefits of a British identity, but that's his prerogative.

What he didn't appreciate, however, was that he was actually making a case for the UK.

That is, within the UK, a diversity of identities in Scotland can co-exist relatively harmoniously. People like this audience member, who wants to be "Scottish not British", can be that. He can forgo all connections with Britishness if he chooses. [Although we would suggest that if he wants to be consistent, he should only ever live and work in Scotland, and if he goes to live or work in another part of the UK, while continuing personally to disdain the Britishness which makes his new life possible, then he should, at least, keep quiet about it!]

And people who want to be "British not Scottish", can be that too, as can everyone in-between.

We can all rub along together, or avoid each other, as the case may be.

We can all swim about in the big UK pond. That's a very big "positive" of the Union.

But here is the thing.

If the nationalists lose the referendum, they can still be Scottish, but if they win, then Scotland will be removed from the UK, and those of us with a British identity - whose personal identity and national allegiance extends to all of these Islands - will find it very hard to be British.

If we win, then everyone gets to keep their present identity. But if the nationalists win, then we lose ours!

Andrew McKie made this point in an article in The Herald:

It is worth remembering that independence is not, for those who oppose it, a step into "the early days of a better nation", but the forcible removal of their existing nationality. One doesn't need to scaremonger about border controls or freedom of movement within the UK - though possible, it doesn't seem very likely in the immediate future - to point out that people will lose something if the Union ends.

Convinced Nationalists will be glad to be shot of it, of course, but there will be very many people who will feel that they have been robbed of their chosen nationality.

Scots living in England will have to decide, for example, whether to apply for a Scottish passport or not. English people with Scottish ancestry will have part of their inheritance rendered foreign. And neither group will have a say in the matter.

It is natural for the SNP to paint independence as an opportunity, and canny to characterise all opposition as timidity. But as things stand, it is the opponents of independence who have the choice to define their nationality; they can be Scottish and British, each to the degree they feel, or choose. They can attend Burns suppers and choose between St. Andrew and St. George. It is the status quo which is flexible; independence is not a liberation, but a restriction of the options.

It's a Benefit to be British. Why Remove that?
I was at a conference recently where a speaker mentioned the extent to which he valued this dual identity. Speaking of his British identity, he asked, "Why take away something which is only a benefit?"

For us, this dual identity is a massive benefit, and a huge positive of the United Kingdom.

The separatists are asking us to become "Scottish not British", because they think taking away a part of our identity is going to be a benefit!

Even if they do not put it in quite those terms, that is what they want us to accept.

Thankfully, the United Kingdom offers the wonderful choice to have a dual identity and to enjoy the immense benefits which flow from that. If you want it, it is there for you. Remember to vote for it!

Update 22-8-14: The following article from the Scottish Daily Mail of 22 August 2014 summed things up very well:

UNIQUE UNION LET'S thank the separatists. They have given us an opportunity to examine not only the history of our Union but also to consider its future, our place in it and what we intend to bequeath to future generations.

Nowhere on Earth has there been such a lasting, mutually agreeable political and social Union of nations – who also, incidentally, have a shared language and history. Indeed, the United Kingdom is not just a nation but a nation of nations.

We have the unique ability to have two nationalities within our psyche running in parallel and almost indivisible.

The profound outcome of this is that we can indulge in our Scottish identity yet have a secure bond with a united and more diverse group of nations, where difference is celebrated and common cause recognised.

Surely this is something worth preserving! Why would we wish to break this incredible Union, which has evolved over centuries with tolerance, respect and common humanity? Yet the separatists would happily cast this precious relationship aside in order to satisfy their craving for a pompous parochialism.

Allowing them to break up our Union would be like handing an axe to a pathological criminal.

I see the referendum as being a unique chance to bring about a renaissance of this nation of nations, and for a future that dares believe we are better together. IAIN G. RICHMOND
Monikie, Angus