10 REASONS why it's GREAT to be BRITISH 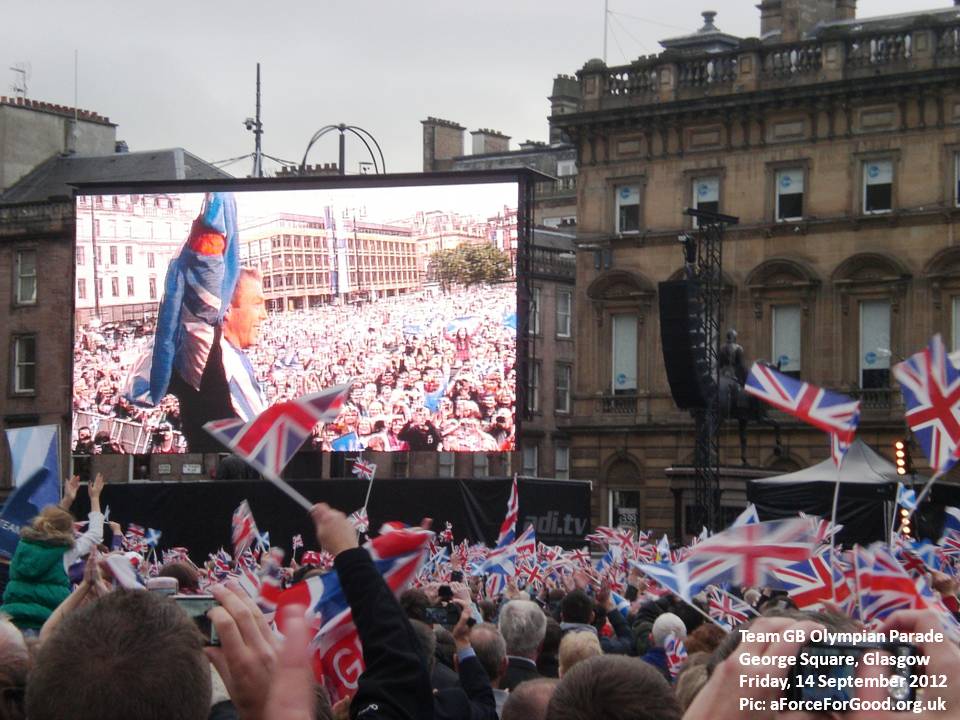 There are plenty of reasons why the British identity is a Great one and here are some of them, says Alistair McConnachie.

The following is based upon a speech made by Alistair at Hothorpe Hall, Theddingworth, Leicestershire, on Tuesday 22nd July 2008. It was posted on this site on 21 March 2012, and updated on 30 November 2012.

The photograph is the Team GB Olympian Parade in George Square, Glasgow on Friday, 14 September 2012. Photo copyright of Alistair McConnachie.

The concern of us all here is that the SNP does not manage to break up our Union, and indeed break up our country, the United Kingdom.

That's what I want to talk about today.

There is a lot of "noise" generated by the nationalists, and the noisy can tend to dominate any political culture, just like they can dominate any social circle.

In both cases, they don't have to be talking sense for them to be heard and to tend to get their way!

So we have a very noisy "First Minister" in Alex Salmond. His raison d'etre requires that he ferment tension between Scotland and England. That's very unfortunate.

At the referendum, the politics of "identity" is likely to play a major role. That is to say, those of us who identify as British and Scottish are more likely to vote for unity than those who identify only as Scottish, and who do not appreciate, or understand, or who have forgotten the value of, the British identity.

So one of our tasks, if we are to win, is to promote the British identity, to reach out to those who have not considered it, and show how it can also incorporate our Scottishness.

With that thought in mind, let me give you 10 Reasons why it's Great to be British! I should emphasise, this list is not exhaustive. It's 10 reasons which occurred to me off the top of my head, and we want to expand this list when we hear from the people out there with more good reasons.

1- It is Great to be British because it is better to belong to 4 countries than only one.
It's great to visit, or go on holiday, or work in another part of Britain and say, "This is my country too".

Those who identify only with Scotland, or England, or only one part of our Islands, don't have that psychological feeling, and can't share that joy. Scotland and England are different countries, but uniquely we are blessed by the fact that we are also part of the same country - Britain. I don't want to have to look on England as a foreign country!

2- It is Great to be British because it is an embracing and inclusive identity with room for other identities within.
For example, a British identity allows for an English, Irish, Scottish or Welsh identity to exist within it - without compromising or stifling the other identity.

Our sense of Englishness, or Irishness, or Scottishness, or Welshness is able to find expression within a wider Britishness. In this sense, these identities complement, not contradict, each other.

We, as English or Scots respect the traditions of our particular nations, but we also respect our collective, shared traditions united within the embracing concept of Britain and our Britishness.

3- It is Great to be British because it is great to identify with all the other people of the British Isles.
To be able to identify with their achievements, and their problems, and share their joy, and their sadness...in every field of endeavour. For example, a British Scot can, if he or she chooses, delight in the success of specifically English sporting teams - because they also represent an extension of his or her own national identity in the world.

An identity which allows one to automatically bond with the other 60 million people who are living in the same islands as oneself is a valuable identity!

4- It is Great to be British because it is an outlook-broadening identity.
It widens one's horizons. It prevents a parochial, narrow-minded perspective. It keeps us focused on the big picture of Britain, and indeed, the world.

You know, one of the aims of the nationalists - and this indicates their narrow view - is to establish a Scottish TV news broadcast at 6pm. That is to say, they want to replace the 6pm BBC News from around Britain with "the Scottish Six" as they call it. I cannot think of anything more likely to narrow the field of vision of the Scots and develop a narrow-minded parochialism than the idea that we all sit around watching the "Scottish Six" report on a Scottish cat, stuck up a Scottish tree, somewhere in Scotland! It is that sort of narrowness of vision which we are fighting against, and which we can challenge and change!

You know, the Scottish nationalists will say things like, "There is no such thing as 'Britishness'."

Well, only to the extent that there is no definitive definition of Britishness. However, the exact same thing could be said about "Englishness", "Irishness" (especially!), "Scottishness", or "Welshness" - all of these identities contain similarities, differences, diversities, inconsistencies and ambiguities. Yet Britishness unites them all.

Those nationalists who like to say, "There is no such thing as 'Britishness'" are simply trying to make a statement of politics rather than a statement of fact. The political aim being to attempt to de-construct and de-legitimise the idea of a political order based upon the identity. If you can pretend the identity does not exist then you can more easily try to de-construct the political order.

6- It is Great to be British because each of us is heir to a rich, shared inheritance, ours by natural right as a Briton.
Whatever is English is part of a Scot's inheritance and whatever is Scottish is the inheritance of an Englishman.

This sense of identity can only be enriching for us all. This shared inheritance is available within the identity of Britishness but it is not available to those who identify only with one area of our island archipelago.

Our history in the British Isles is an amazing history of people, settlement, achievements, challenges, struggles. We are all heir to this remarkable history regardless from where in the British Isles we hail. If we only identify with one area of our Islands then we cannot feel part of that inheritance - and intellectually and spiritually, that will impoverish us.

7- It is Great to be British because Britain was our original country.
Long before there was an "England" or a "Scotland" and long before warring tribes separated Britain up into the arbitrary boundaries we have today...there was "Britain", our nation! One of the earliest references to our country is by Virgil (70-19BC) in his reference in Eclogue I to the land, "Where the Briton dwells, utterly estranged from all the world." 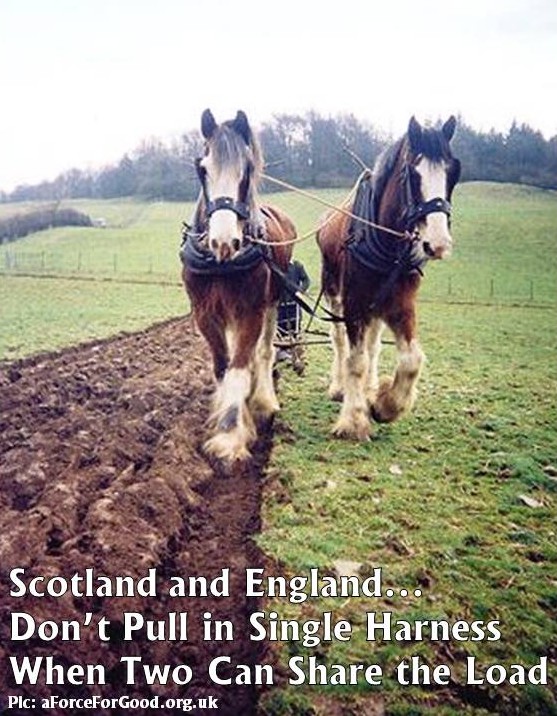 8- It is Great to be British because together we can accomplish more.
Like a man and woman, who marry, we "Don't have to pull in single harness all our lives." We're stronger together and the tasks which face us can be better solved by a people united. Which leads us to...

9- It is Great to be British because Britain is greater than the sum of its parts.
Again, like a married man and woman, this has long been observed. For example, in 1603, 33 years after being crowned King of Scots, James VI became James VI of Great Britain. His vision was one of British unity:

Doe wee not remember, that this Kingdome [England] was divided into seven little Kingdomes, besides Wales? And is it not now the stronger by their Union? And hath not the Union of Wales to England added a greater Strength therto?...I desire a perfect Union of Lawes and Persons, and such a Naturalizing as may make one Body of both Kingdomes under mee your King. That I and my Posteritie (if it so please God) may rule over you to the Worlds End; 1

We also point out to those who imagine the idea of Britain is "a recent modern invention" that James VI liked to be styled "King of Great Britain" 2 and indeed the King James Bible, first published in 1611, states on its very first page:

James by the Grace of God
King of Great Britain, France, and Ireland
Defender of the Faith.

10- It is Great to be British because it prevents tiresome quarrelling and unnecessary conflict as a result of different identities.
A lot of the separatist case for the so-called "independence" of Scotland from England is frankly, unnecessary, unrealistic, unworkable and unwanted.

The separatists imagine Britain to be a temporary arrangement with an inevitable fate of separation. They are wrong. It is more sensible and more correct to see Britain as a natural and evolving organism tending towards unity.

We emphasise unity, not division - what we have in common, not what divides us. We say that a vision of a united Britain is more inspiring in its appeal than that of a separated Scotland!

To summarise: It is great to be British because it is great to identify with, and to support, Britain and its people - all those of us who possess and share in common, a particular history, an inheritance, a set of cultural traditions, and a distinct set of national icons and institutions.

It is great to value all of this and to want to see these elements supported, secured, strengthened, esteemed and promoted at home and abroad.

It is great to emphasise the spiritual, intellectual and physical bonds which exist in our islands, and to emphasise the inclusive British identity which we can all share, instead of the artificial differences constructed by the politics of the day.

Our destiny is bound intimately with our fellows throughout these islands. It is foolish to divide ourselves wilfully against each other.

So let us be united in spirit: A community of people standing together and sharing naturally in each other's achievements and joy and in that regard, let us remember the immortal words of Robert Burns 3

Be Britain still to Britain true,
Amang oursel's united;
For never but by British hands
Must British wrangs be righted.


This poem has circulated since around 2000, and it is claimed to have been "written by Miss J.E. Clarke of Eynsham, and published originally in the 28th August 1889 edition of Judy, the Victorian magazine for girls."
We don't know if that is really the case or not, but it is a very appropriate poem!

Plans for separation grew worse than those before,
Then they asked for two Parliaments, now 'tis three or four.
Only just imagine if Home Rulers had their way,
This is something like the tale the world might hear one day:

One United Kingdom they fancied wouldn't do.
To please some grumbling Irish they split it into two.
Two little Kingdoms, but then the Scots, you see,
Claimed their ancient throne and rights, and then there were three.

If you appreciate the work we do, please donate to our Research and Street Activism via PayPal here:
tinyurl.com/ydxne3qx