Betrayed? No, Scots wanted the Union 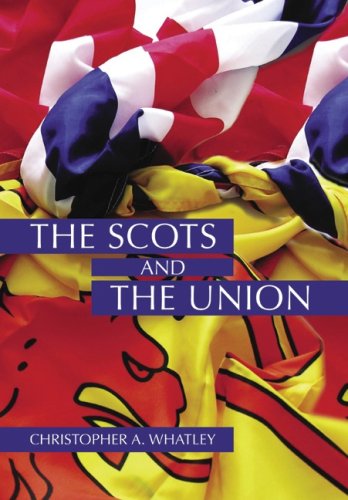 As the 300th anniversary of the Act of Union nears, an academic has fanned controversy by claiming the 'parcel of rogues' did not sell Scotland down the river. Lorna Martin reports

The 1707 Treaty of Union has long been portrayed as a tale of bullying, bribery and betrayal. As such it has given the Scots much to moan about over the years. 'We are bought and sold for English gold. Such a parcel of rogues in a nation,' wrote Robert Burns as he raged against Scotland's loss of independence.

But a controversial book by one of Scotland's most eminent historians, Christopher Whatley, published ahead of the 300-year anniversary of the event, casts doubt on the popular idea that the Scots were sold down the river by their neighbours and presents new evidence that suggests that many parliamentarians went willingly into the Union.

Whatley, professor of Scottish History and vice-principal and head of arts and social sciences at Dundee University, said the men who negotiated the treaty should be celebrated north of the border, rather than maligned as a shower of rogues and fly-by-nights who were bribed into abandoning their parliament. The suggestion that it was a measure imposed by England on reluctant Scots is, he said, a gross oversimplification.

The book, even before its publication next month, has sparked a furious debate, with nationalists condemning it as pro-Union propaganda and Unionists seizing it as evidence as to why these two uneasy neighbours should remain united.

There is a resurgence in interest in the Union on both sides of the border ahead of next year's anniversary. Both Gordon Brown and David Cameron have ventured north in recent weeks in an effort to try to defend the merits of 'Britishness' to an increasingly sceptical public.

Whatley is at pains to stress that his book is not a political manifesto. Instead, he hopes it will lead to an evidence-based debate about the future.

'For many years there has been a view that Scotland's supine politicians were bribed into abandoning independence. It has led to the view that the Union was an illegitimate act that shouldn't have happened and that it wasn't Scotland's decision. Parliamentarians who negotiated the Union have been regarded as traitors, while opposition MPs are seen as the patriots.'

He claims this is not entirely true. 'There has been an element of invention. The long-held and popular notion that the Scots were bought and sold for English gold simply doesn't stand up to close scrutiny. The argument that the Scots bargained away their Parliament for free trade and access to England's colonies is an important one and what I once believed, but not the whole story.'

He insists a number of Scottish parliamentarians fervently wanted the Union, and says any debate about its future must recognise this. 'It was not forced on them. It is of critical importance that the debate should be conducted in today's terms and not on the basis of some sort of grudge or mythical understanding of how we got here in the first place.'

His highly controversial conclusions are the results of four years of painstaking research, examining handwritten records of the speeches made about the Union, piles of burgh and church records, private diaries and the papers of minor politicians whose votes were crucial in securing the union. Whatley believes many of the materials have never before been studied in detail and said his findings took him by surprise.

With the help of his research assistant Dr Derek Patrick, he compiled a list of members of the Scottish parliament from the Glorious Revolution of 1688 to the Union and then carefully tracked back their history, voting records and political ideology. It is the first time this has been done and shows many held pro-Union views, primarily for religious reasons, though also economic and political ones.

'I didn't expect what we found. Nor did my researcher. He went into this project expecting and hoping to find all sorts of evidence of bribery. But the records that we looked at showed that politicians were not simply "bought off". Most of them were on board already. They didn't need a bribe to vote for the Union.'

He also cast doubt on the famous book by George Lockhart, also known as Lockhart of Carnwath, whose Memoirs of the Affairs of Scotland is the key source of information about bribery allegations. It is a critical document in Scottish history. In an appendix it lists 30 people who received sums of money - the £20,000 of gold that came north - from Queen Anne.

But Whatley claims that at least four of those people did not even have a vote in parliament and, more importantly, most of those who did receive money were actually long-standing unionists anyway.

'I'm not saying money didn't change hands,' he explained. 'It did and I think around four or five people were actually bribed. They include Lord Banff, who did change his mind at the last minute and who received a relatively small sum. But this idea that bribery was the main reason why Scottish parliamentarians gave up their independence is completely misleading. It fails to appreciate that for religious and economic reasons most of these characters were pro-Union anyway.'

Whatley says money was paid largely for legitimate reasons, including for back salaries and as compensation for the Darien disaster, the ambitious scheme to establish a Scottish colony in Panama, which ended in loss of life and financial ruin. The venture was not helped by King William of Orange and many Scots, to this day, believed that their chance of independence had been deliberately sabotaged by the English. They were completely incapable of going it alone afterwards and felt deeply betrayed.

'I'm not suggesting that these Scottish parliamentarians who negotiated the Union weren't flawed. Yes, they were womanisers, drunkards and inconsistent. They were politicians - they also wanted to get to the top of the tree. But to reduce it all to the idea that they were bought off for their own personal gain is simply not true.'

Compensation for the Darien venture is sometimes called the great national bribe. But Whatley also challenged that view. 'It wasn't a bribe. It was a victory for the Scottish negotiators because they got what they wanted. That is why many walked away from previous discussions. But in 1706, they got something which they would never in any other circumstances have achieved: their money back plus five per cent for a failed scheme. I'm not saying we should be grateful to the English. Leave them out of it. Darien failed for various important reasons, including the location. But the compensation allowed Scottish investors to start from scratch within a new economic environment. I consider it a great negotiating victory, not a bribe to supine Scots.'

Most controversially, Whatley casts doubt on the origins of Burns's quote. 'Bought and sold for English gold,' is one of his most famous and has long been widely thought to refer to the Union treaty. Whatley points out that it in fact predates the Union, and was used in the late 17th century to condemn government ministers who supported William on the Darien venture and were therefore seen to be in the pay of the English.

There is also a widely held view that had the Scots not accepted English proposals for the Union, the country would have been invaded. According to Whatley this is another convenient myth. He said troops were ordered to the border in 1706 but at the behest of Scottish politicians who were concerned about riots, disturbances and even the threat of the parliament being stormed.

At the time it was the Jacobites who were protesting most vocally about the union as it would have banned a Catholic ever again sitting on the British throne, a piece of 300-year-old legislation that, to the disgust of many, still stands today. Whatley said Scotland was a nation divided and that had troops come north they would have been welcomed by many presbyterians who feared more than anything else a Jacobite insurgency.

Despite his insistence that his book is not a manifesto for the future, it will no doubt be seized upon by pro-Union politicians at a time when the fissures are becoming deeper by the day.

Gordon Brown, trying to convince himself as much as his audience, recently spoke of 'ever-closer connections between the nations' and of being 'stronger together and weaker apart'. Afterwards, Alex Salmond looked more relaxed than ever. He dismissed Brown's backing for 'Britishness' as a desperate attempt to woo the increasingly resentful English. He believes his party is capable of making big gains in next year's elections and knows his independence cause can only be helped by the perception south of the border that Scots are a nation of whingers.

Into all of this comes Whatley's new findings, casting doubt on the widely believed tale of bullying, bribery and betrayal. So the Scots may not have been as hard done by as previously thought. That's certainly something worth moaning about.