'Julian', the Tank which Glasgow Welcomed 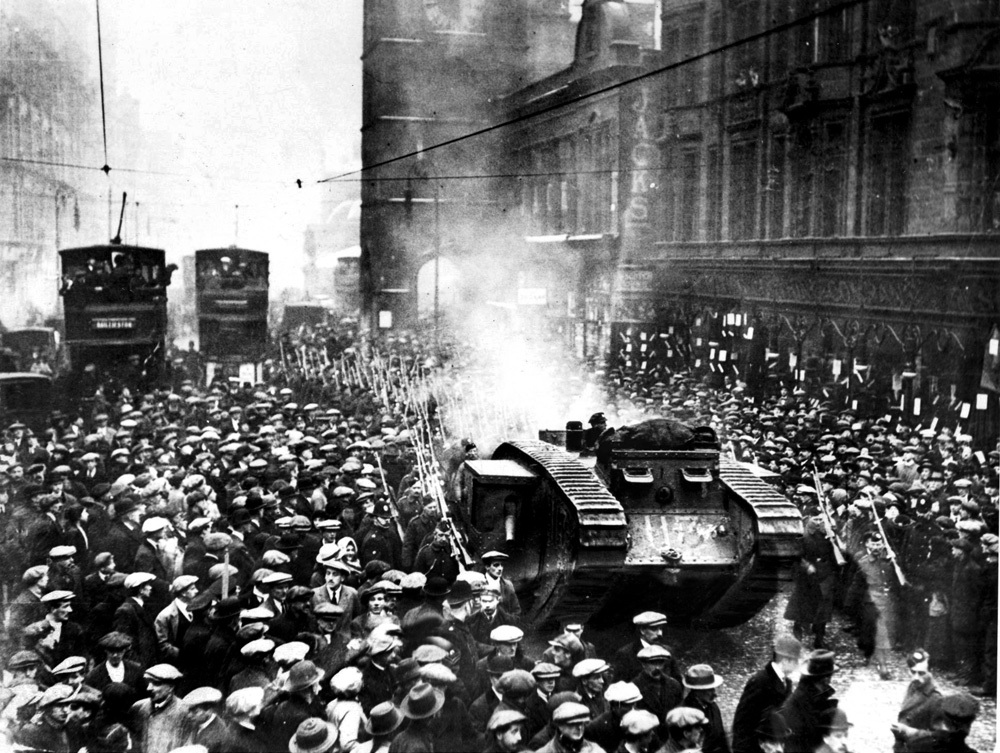 A famous photograph in Glasgow history has been misrepresented – largely by the Herald newspaper – for almost a century.

In this article, Alistair McConnachie discovers that a photograph of a tank in Argyle Street "in 1919" which, we have been told had arrived to suppress some kind of workers' uprising, is not all it seems. Indeed, it is quite the opposite!

This is a fascinating picture of a tank trundling down Argyle Street, near the Trongate, in Glasgow, surrounded by soldiers.

We were first alerted to this picture when we saw it in the Glasgow newspaper, The Herald in 1999 1 in an article about a demonstration in George Square on Friday 31 January 1919, which got a little bit out of hand – an event some, usually on the far-left refer to, somewhat melodramatically, as "Bloody Friday", even though nobody was killed or seriously injured.

In a future article, we will examine the events of that day, and the immediate period thereafter. For now, we want to concentrate on this photograph.

It is remarkable. It exudes excitement. What on earth is going on? The Herald article captioned it, "Tanks [sic] on the streets the day after the George Square confrontation".

In 2000, The Herald ran the photo again, with the caption "A tank rolls through the crowds in Glasgow's George Square [sic] in January 1919, a time when the government feared revolution." 2

To this day (24-1-15) the newspaper is selling the photograph on its website, under the title "People Power - Tanks in Trongate". 3

With this title, it is deliberately suggesting that this is a photograph of the British Army bringing a tank onto the streets of Glasgow in order to suppress some kind of revolutionary uprising among Glaswegians.

If this is an attempt to put down the crowds, then several things in this picture don't make any sense.

The crowds are very keen to see the tank. People are crowding the pavements to catch a glimpse. People are craning from the top deck of trams. Nobody is angry or trying to stop it. The soldiers are not being harassed, nor are they panicked. There are only three policemen in the whole of the photo.

Today, this photo continues to get wheeled out on the internet – usually by the political far-left – as some kind of evidence that "the British State" was putting down the Glaswegian working man at the time.

However, as we have discovered, the truth of this event is the absolute opposite.

The truth is, this is a picture taken some time in the week beginning Monday 14 January 1918 – over a year before the George Square fracas.

This is a photograph of "Julian the Tank Bank", no 113, a Mark IV, which is in town to raise money for the war effort! Its number 113 is clearly visible on its front.

The 'TANK BANKS'
The Government realised it could capitalise on the public's fascination with these exciting new vehicles. It used 6 of them to travel around towns and cities in the UK. A tank would arrive with a fanfare – in this case, marched in with soldiers – park in a central area for several days, and sell War Bonds and War Savings Certificates to raise money for the war effort.

Civic dignitaries and local celebrities would greet the tank and make speeches standing on top of it – as we can see from this silent film of "Julian the Tank Bank" in Edinburgh, Dundee and Aberdeen. 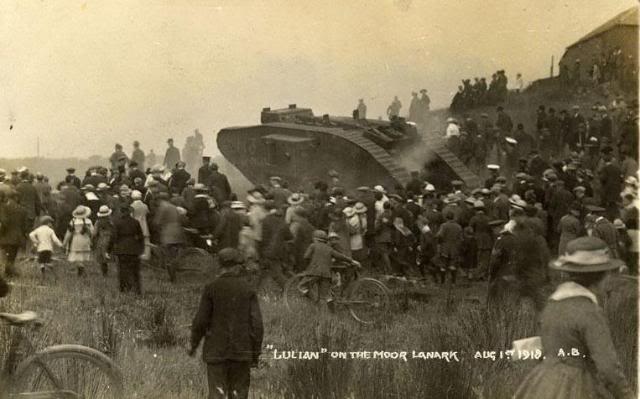 There are pictures on the internet of it entertaining the crowds in Denny, Lanark, Jedburgh, Newton Stewart and Aberdeen around this time.

We know that the picture of "Julian" in Glasgow is likely to be sometime in the week beginning Monday 14 January 1918 because it came through from Edinburgh after finishing its time there on Saturday 12 January, according to a newspaper report which is accounted here: Michael A Taylor, "The Tank Banks of Edinburgh and Leith". It was unloaded at the High Street Railway Depot at the top of Argyle Street, towards the end of the photograph.

There was even a competition to see which town or city could raise the most, per head of its population, and whoever won could keep the Tank. West Hartlepool raised the most per head.

But which British city raised the most overall money as a result of the Tank Bank campaign?

Yes, it was Glasgow – which went on to raise more funds in the Tank Bank campaign than London, Birmingham and Manchester put together!

It is astonishing, and disappointing, that this famous photograph in Glasgow history has been misrepresented – largely by the Herald newspaper – for almost a century now.

It is not a picture of a tank which has arrived to put down some kind of mythical "workers' uprising." Indeed, it is quite the absolute opposite of any "revolutionary" circumstance. It is a photograph of a popular event which successfully collected more funds for the war effort in Glasgow than in any other British city!

Furthermore, no photographic or film evidence has yet surfaced of tanks aggressively on Glasgow's streets at this time or any time. 5

The footage of the second clip of tanks, which has been used briefly at 0.43 in the STV report has been taken from this original video of a Tank Corps contingent in London preparing for the Victory Parade, July 1919. http://www.britishpathe.com/video/tanks-stand-by/query/tanks

The only other picture of tanks in Glasgow which exists, which may or may not be around this time, is a picture of several tanks which are being stored in what is said to be the Cattle Market, beside the High Street Rail Depot. Some claim that these are 6 tanks which were ordered to Glasgow after the George Square incident. If this is the case, then it is still correct to point out that none of them were ever used on the streets of Glasgow. A further article will examine the aftermath of the George Square incident.

Postscript (1-2-16):
Since this article was published, we have been alerted to other articles on the web relating to Julian. For example, here is an article entitled The Tank Banks of World War 1: Julian Visits Newcastle, New Year's Day 1918. This was prior to its journey to Edinburgh.

Here is an article from the Black Country Bugle (17-8-14) relating to Julian's time in Dudley: Even Dudley children joined in the battle to raise money to buy tanks in 1918. It claims, "Julian had already raised more than £40,000,000 in purchases of War Bonds and War Savings Certificates by the time he arrived in Dudley, three quarters of which had been amassed during its time in Scotland."