Smith Commission: We Voted No. Not for More Powers. 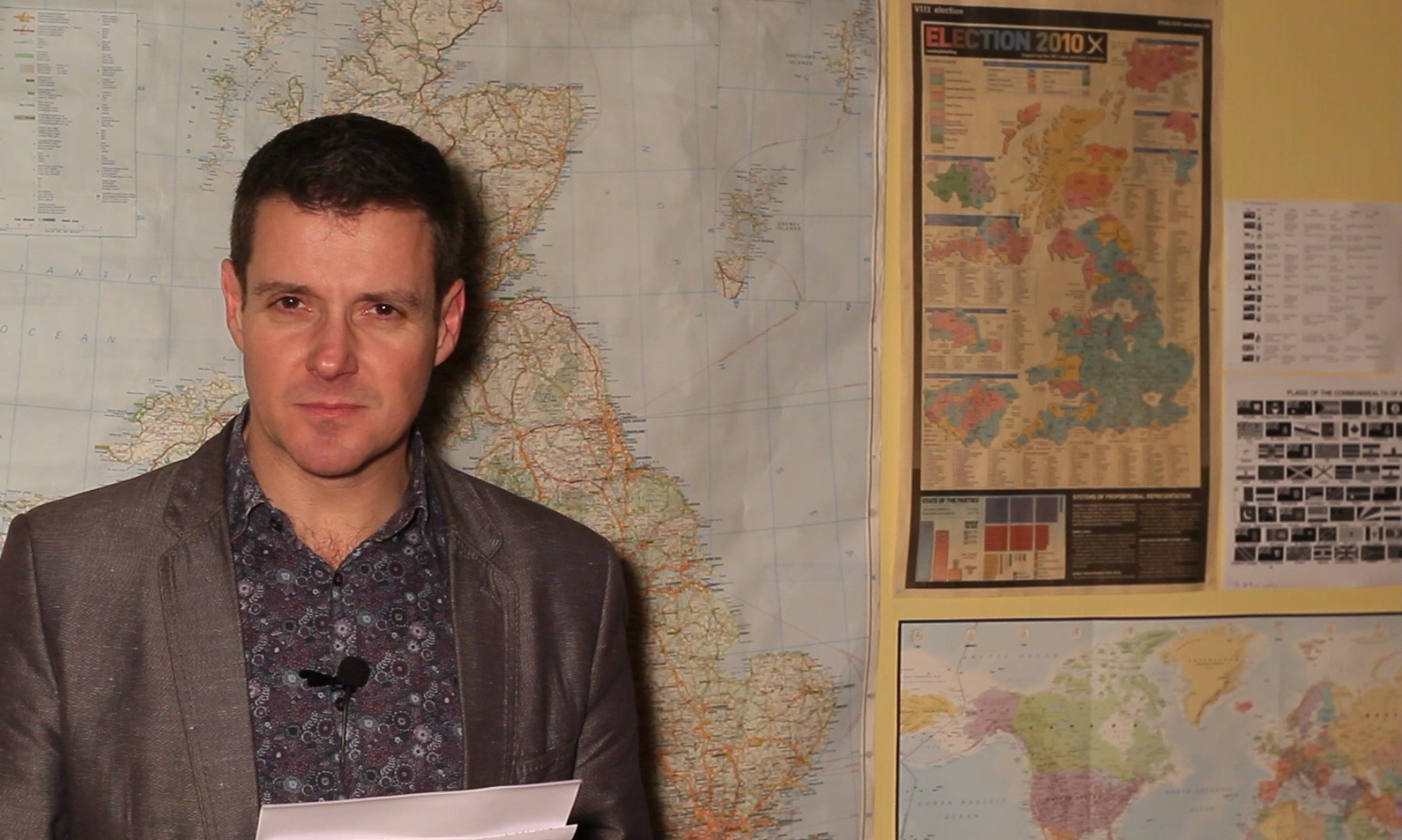 One of the advantages in running an independent campaign, which is not associated with political parties is that we are free to comprehend and articulate the purity of a position untainted and uncomplicated by short-term, self-interested party political advantage.

In this video Alistair McConnachie uses the example of proposed income tax devolution to emphasise the futility of trying to appease the nationalists for some kind of advantage, which will never come in any case.

After all, any failure, or perceived failure, of devolved taxes to work properly will be blamed on Westminster, and this will lead to more pressure for even more powers for the nationalists.

Our unionist politicians are in danger of throwing away the victory won by the pro-UK side in September and selling out those of us who used the principle of the UK as a sharing and redistributive Union - and the very unworkability of different tax rates in practice - in order to argue persuasively for a No vote in the first place!

Our politicians should concentrate on the Big Picture of Britain and seek to maintain the long-term integrity of the UK.

I'm a full time campaigner for the Union of the United Kingdom and at the referendum I was an official "Permitted Participant" for the No side.

In this video I'm going to speak about the Smith Commission.

The Smith Commission is the group which has been charged with finding an agreement between the main parties at Holyrood over which new powers should be devolved from Westminster.

It's composed of two representatives each from these political parties and Lord Smith, the Chairman. In all, 11 members.

Everyone in the UK was free to contribute their ideas and they've received over 18,000 submissions from individuals and from organisations.

And no doubt these submissions, we should expect, will be of varying quality.

We expect some would simply be 2 or 3 line emails from nationalists demanding virtually all powers.

While others would be the self-interested, Policy-led submissions from organisations concerned really to advance their own particular interests and to feather their own nests.

We ourselves made a very extensive Principle-led submission of over 10,000 words, where we laid out the pro-UK principles which should be guiding all such considerations of devolution in the UK.

It advocates Devo Zero, Devo Minus and Devo Mini.

Please check it out. It's got over one thousand Likes on Facebook already.

Now the Smith Commission is due to release its findings on the 27th of November, in time, we were told for St Andrew's Day on the 30th.

This will represent the supposed consensus which the Commission has been able to achieve between the SNP and the Greens, both of whom are for independence, and the Labour, Lib Dem and Tory parties which are against.

That will then go to the UK Parliament and it will write it all up in a draft Bill.

And because it seems we all live our lives from one Scottish celebration to another, we're told its going to be released in time for Burns Day on the 25th of January next year.

Then after the General Election on the 7th of May, whichever party or coalition is in power, it will then take that draft Bill and it will turn it into law.

Now, it may be that between this week and the 25th of January the UK Parliament will weed out those proposals which are simply impractical.

On the strength of what we know at present, some of which we'll be mentioning in this video, we certainly hope so.

And we'll be advocating just that.

Because, quite frankly, as we're going to demonstrate in this video, the policies we have heard so far are entirely unprincipled from a pro-UK perspective.

After all, where is our choice between 5 political parties all promoting the same policies!

And, let's remember, Scotland voted No.

We did not vote for "more powers", regardless of what the nationalist politicians might try to tell us.

So let's look at some of the proposed policies.

Our submission to the Smith Commission was entirely Principle-Led. We laid out our Pro-UK Principles upon which we judge Policies.

And standing on that rock of principle is a safe place to stand.

Because if you don't stand on principle, then you stand on shifting sands. Shifting sands that will eventually swallow you up.

So here is a pro-UK principle upon which we stand: The UK is a sharing and redistributive union.

It won't be distributed equally because some areas have greater need.

But that's good. We're all happy that that should happen that way, if we believe in the Union.

I want to know that if I were to go down and work in England for a few years that the money that I paid there would be distributed throughout the United Kingdom, including Scotland.

People in the rest of the United Kingdom want to know that if they come to Scotland to live and work for a few years, that the money that they pay in taxes up here will also be distributed throughout the United Kingdom, including their home town back in England, or Northern Ireland or Wales.

So, having the same tax rate is an example of a shared political institution which leads to a shared sense of social and cultural unity.

Unfortunately, one of the proposed policies suggested by the Smith Commission is the full devolution of income tax.

Now, of course, we are wholly opposed to that in principle.

But in practice what are the arguments for it?

There seem to be three arguments put forward by people who would otherwise be considered unionists.

The first is that it will make Holyrood more accountable for the money that it raises and spends.

However, Holyrood is actually at the moment quite accountable for the money that it raises and spends and very few of us bother to even look into that question, or to do the sums.

Secondly there's a feeling that if the SNP were granted these powers that they would somehow mess it up.

And because they messed it up, nobody would vote for the SNP again.

But that falls down.

For example, what if you give the SNP these extra tax powers and they actually make a reasonable job of it.

All you've done is strengthened their position.

And anyway presuming that the SNP is going to make a mess of raising taxes, well, why should we want to see Scotland messed up just to prove a negative point?

Why hand the SNP full tax control just to prove that they're not capable of handling it?

Why learn the lesson the hard way!

And the third justification for giving them more tax powers, which is extremely naïve, is that somehow the SNP will no longer have anybody to blame when things go wrong.

That entirely misunderstands the nature of the SNP.

The SNP is a political movement which at its heart is motivated by grudge, by grievance and by the desire to blame others.

That's part of its nature.

If they don't make a reasonable job of handling the new tax powers, then of course, they will blame others.

They will blame the UK Parliament, as they always do.

It's in their nature to do so.

And many people, as usual, will believe them!

They will never stop moaning. It is in their nature to moan.

You could fire the rest of the United Kingdom to the moon, and the SNP would still find a way of blaming it for Scotland's problems.

And how would tax devolution work in practice anyway?

Consider: Any administration at Holyrood cannot use any income tax power without putting Scotland either at a serious disadvantage, or at an advantage, in relation to the rest of the United Kingdom.

For example, higher taxes would be bad for Scotland because the mobile earners would leave for others parts of the United Kingdom.

Lower taxes would be bad for the rest of the United Kingdom, and particularly the North of England, because mobile earners would leave for Scotland.

And that's to say nothing about the grievances which could be exploited between the Scots and the English.

And it's to say nothing of the massive costs of setting up an entire new system which is entirely unnecessary.

Is it too late to hope that the Smith Commission will throw out the idea of devolving income tax?

If it's too late to hope that the Smith Commission will do so, then let's hope that the UK Parliament throws it out when it comes to putting together the draft Bill.

That's certainly something we should be campaigning for!

And in that regard we shouldn't be afraid of the nationalists who will say things like, "Oh you're going back on your promises."

So we should be prepared to make the case against the devolution of income tax.

So we find the arguments for the policy to be highly questionable.

And in any case, we're against it, as we say, in principle.

In conclusion: We voted to stay in the UK!

We voted No to the break up of our United Kingdom!

We did not vote for "more powers", regardless of what the nationalists and some of our unionist politicians might tell us.

You know, we live in a small Island group.

With modern transport and modern communication methods, our politicians should be seeking ever closer union.

Not tearing us apart through this ever wider separation.

Policies which strengthen the United Kingdom.

Policies which put the "United" back into the Kingdom.

We should be seeking ever closer union, not this ever wider separation.

If you appreciate the work that we do, then please consider making a donation. You can contact us via the details on the website.

My name is Alistair McConnachie. Thank you for watching.

USEFUL READING
Peter Jones, "Smith risks weakening the Union", The Scotsman, 25-11-14, p. 23 and at http://www.scotsman.com/news/peter-jones-smith-risks-weakening-the-union-1-3614844 This is the best short article we have read which neatly summarises the unionist case against income tax devolution, and by implication tax devolution generally.

Prof Hugh McLachlan, "English votes for English laws is much less sensible than it first appears", The Conversation online magazine, 21 November 2014 at https://theconversation.com/english-votes-for-english-laws-is-much-less-sensible-than-it-first-appears-34552 Prof McLachlan is a professor of Philosophy at Glasgow Caledonian University and in this article he explains the difference between a genuine "problem" and a "paradox". EVEL, he concludes, is an attempt to resolve a political paradox - but it is a paradox which it could be possible to continue to live with, and something where any attempt to find a rational correction might well make matters much worse.