Contrary to what Separatists Say, Sovereignty in Scotland and England is the Same (and yes, we know all about 'Lord Cooper's famous dictum') 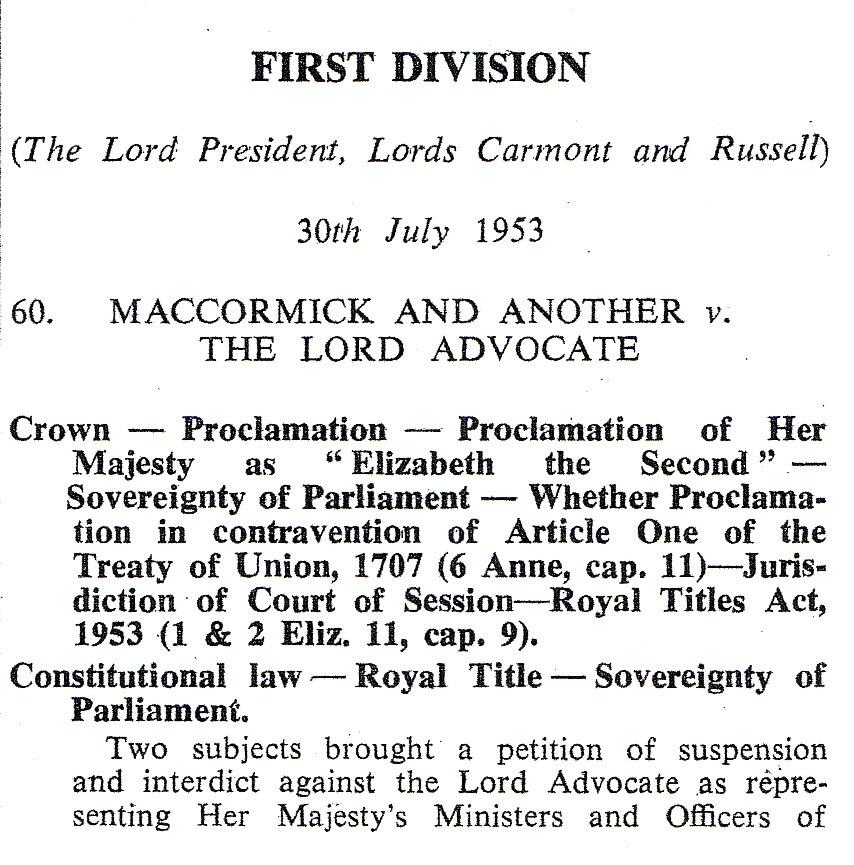 Alistair McConnachie explains how separatists seize on a sentence from a 1953 court case to construct an inaccurate and potentially harmful concept of Scottish sovereignty. Alistair has a degree in Scots Law from Strathclyde University. This article was posted on 11 July 2012.

Scottish Nationalists have several key quotes and documents to which they like to make constant reference in order to try to bolster their case. One of their key quotes is "Lord Cooper's famous dictum", from a court case in 1953.

In this case, the petitioners John MacCormick and Ian Hamilton argued that the Royal Styling of Elizabeth "the Second" was in breach of the first article of the Treaty of Union. The case was heard initially by the Lord Ordinary, Lord Guthrie and he found for the Crown. The petition was dismissed. They appealed and it was heard in the First Division by the Lord President Lord Cooper, and Lords Carmont and Russell. They affirmed the Lord Ordinary's decision.

The case was reported in full and some interesting comments and opinions can be found in the 1953 Scots Law Times, and Session Cases.

The sentence which the Nationalists like to quote is the comment (and it was no more than an opinion) by Lord Cooper that, "The principle of the unlimited sovereignty of Parliament is a distinctively English principle which has no counterpart in Scottish constitutional law." [SLT (1953) 255-265 at 262, and SC (1953) 396-418 at 411]

Nationalists seize on this sentence in an attempt to make three points.

Firstly, to portray the Scots as somehow constitutionally and democratically superior to the English. The idea is that the poor, trod-upon people in England are not "sovereign", but rather it is their over-bearing Parliament which is "sovereign".

Secondly, the Westminster Parliament, being "sovereign" is not aligned with the Scottish "constitutional tradition", where the people are "sovereign", and is therefore alien to the Scottish democratic mentality. We Scots should break away and be free from such an imposition with its alien conception of sovereignty which oppresses our democratic instincts.

Thirdly, at its most extreme, this belief in the absolute sovereignty of "the People of Scotland" can even be used to suggest that the Scots have no need to listen to Westminster, or obey it, because it imposes a "parliamentary sovereignty" which is foreign to our ways.

To answer the first point: Scots are not "more democratic" than the English. That's just a form of "Wha's like us?" self-flattery. David Aaronovitch dealt with this very well, 14 years ago.

Certainly, the people are the fount of sovereignty in a democratic sense, but once we have elected the Parliament, then our Parliament must be sovereign in a legal sense and we must abide by its rules, until we elect a new one. These conceptions of sovereignty exist in every modern democratic state.

The third point - that Westminster's sovereignty is so foreign an idea that the Parliament itself need not be obeyed - is a dangerous one, which tends to justify law-breaking. On the contrary, the fact is that the Scottish people have exercised their democratic sovereignty by electing representatives to Westminster, and have regularly endorsed that institution by their behaviour. Indeed, they have done so much more enthusiastically than they have ever endorsed the parliaments at either Holyrood or Strasbourg.

In a letter which we had published in The Herald on 29-6-12, we pointed out that Westminster trumps Holyrood for democratic legitimacy, since 64% of the Scottish electorate voted at the General Election in 2010, compared to a mere 50% at the Scottish Parliament election in 2011.

Recently we noticed someone using Lord Cooper's opinion to justify the notion that because "The People" of Scotland (capital letters) were ultimately sovereign, that meant "Westminster has no dominion over us" (The Herald 4-7-12, Scotland on Sunday 8-7-12).

As above, this is nonsense democratically, is quite wrong legally, and is potentially socially harmful. After his third letter appeared in the space of 6 days, we decided to set him straight.

Our letter was published in The Scotsman on Wednesday 11 July 2012, and we quote from the report of the case, which we took time to research in the law library at Strathclyde University:

Update (20-7-12): This person then had another letter published in response stating that Lord Cooper's opinion was a "judgement", giving the clear impression that he did not understand, nor appreciate, the necessary distinctions we were making. In a response on the Scotsman's letters webpage on this matter, someone pointed out, correctly, that John JG McGill, "is confused between legal authority and other sorts such as moral authority. Furthermore, Lord Cooper of Cardross is not infallible with regard to interpretations of the law. The notion of 'the people of Scotland' having legal rights of any sort is highly dubious. Not all social phenomena can have rights. Agents and agencies can have rights and duties but 'the people of Scotland' is neither an agent nor an agency."

Update (21-8-12): We had the following published as the lead letter in The Herald on Monday 13 August 2012, under the banner headline "Nationalists on path to danger over parliament's sovereignty". There were no further responses.